Advertisement
You are here: Home » How To Build Colorful Command Line TUI For Shell Scripts
Advertisement

Command line interface and text based user interface (TUI) has difference. We are actually talking about the TUI but referring as Command Line. That is because we want to say that you’ll build the colorful interface for SSH.

The planning part is important. Because, for basic dialog, prompt, we do not need too much complicated libraries but for full applications, invariably we will need complicated bigger libraries. The way of approach for bash scripts and program written in C, C++ or Python will vary.

How To Build Colorful Command Line TUI For Shell Scripts

Most simple way for the bash scripts

Another example with screenshot : 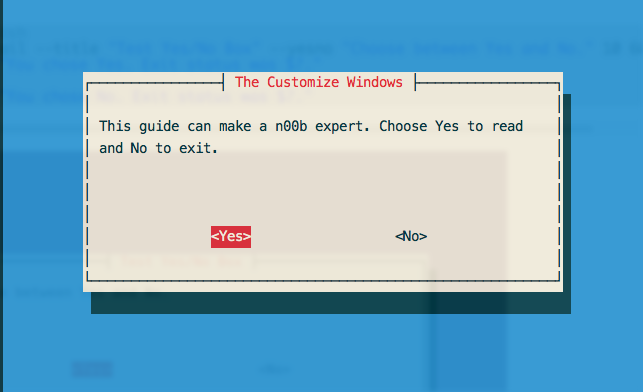 Same goes for tput. Here is a script which checks whether tput is installed, if installed then gives an interactive colorful command line TUI, if not installed, gives a command line output :

I kept some example scripts on Github for you. There are also tools like lxdialog, GDB etc.

For more complicated logics many bash scripts, you can use this kind of library to build applications :

On Linux or MacOS X, the widely recognised standard is ncurses. Python provides a module to wrap this native library. You can see examples of urwid :

Ncurses is almost standard, you can read guide here :

Ncurses and Program in Python

Ncurses and Program in C

For using ncurses with C language, we need C compiler installed on machine and have the ncurses headers available. For MacOS X, we need XCode installed, for Ubuntu we need libncurses5-dev. We need to create a Makefile :

compile and run the program:

This Article Has Been Shared 636 Times!