Previously we talked about TM1637, which is a small VFD, 7 segment display mainly foe creating digital clock with Arduino or projects like traffic light with timer and push button.TM1638 is a credit card size multipurpose board with eight push buttons, eight 7 segment displays, eight LEDs. There is another uncommon version of TM1638 MCU with 16 push buttons and eight 7 segment display looking like a calculator. Here is Basics of Arduino TM1638 Display Module. This module is quite bigger and has own library. Except the look and few code of TM1637, there is not much resemblance with TM1638. Price of digital clock with Arduino is around $5 per piece. It is impractical to compare TM1637 with TM1638. It can be used with Raspberry Pi too. 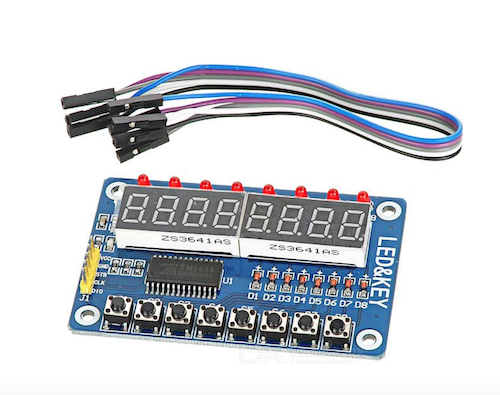 As it is not any standardised module, the features can vary. We will suggest to have an enclosure for this module as basically it is a multipurpose dashboard for easy realisation of the projects. We will suggest to buy the normal version not the one with 4×4 = 16 push button keys. You can buy such 4×4 = 16 push button key module separately with more options.

You can see the project on Github :

TM1638 Display Module is common and cheaper. This TM1638 module is a very convenient circuit that uses a protocol similar to SPI with 3 wires. Manual is very confusing, but there are some tutorials in the Web and in Youtube for using this. But, all this difficulty is of no importance when 7-segment displays turn on and you watch numbers and data. Datasheet for chip is here: