Advertisement
You are here: Home » Server Sales Declined in 2017 As An Effect of Cloud Services
Advertisement

According to Gartner & IDC, public cloud services ate up server hardware market that resulted in decline in server sales in first quarter of 2017. Server sales declined in 2017 as an effect of cloud services is not good news for the manufacturers with cloud services like Dell, HP too. Various companies more and more increasingly abandoning the solutions on premise and moving to the cloud. This transit ultimately translates to a significant drop in revenue and shipments of the server manufacturers. Although data for the first quarter 2017 published by IDC and Gartner are slightly different from each other, the cause of this decline is clear to the analysts of both companies – it is the public cloud which is responsible.

Despite purchases are increasing in hyperscale data center segment, large companies and small/medium firms increasingly performing the role of end users and meet their growing application requirements through virtualization alternatives or considering cheaper public cloud services. As for easy example, for a small company’s public part, it is profitable to use OpenVZ 6GB RAM at $7/month price coupled with DynDNS like service, a good CDN to  for hosting public services. Server essentially needs change every 5 years.

As for figure, Gartner calculated globally the amount to 12.5 billion dollars, which is 4.5% lesser compared to 12 months earlier. According to IDC it is 11.8 billion dollars. 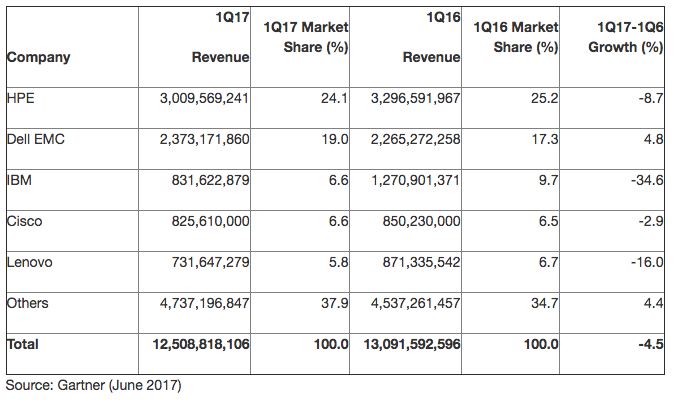 Also now the market is preparing to step to adapt the new range of Intel processors, in the future we might see a change in deployment mode and understand which architectural choices will be undertaken considering modularity, environments work, software and cloud services.

Who are at the top of the industry in the segment? HP Enterprise with 24% market share is the largest server vendor. DELL is at 19%. Taking instead as a yardstick the volume of shipments, it is DELL who is at the first position (17.9% market share), followed closely by HPE (16.8%).

None of the manufactures has cheap public cloud services. Also, the servers manufactured 5 years back not exactly outdated compared to the scenario that was one decade back – they can be re-used.

This Article Has Been Shared 453 Times!