This is kind of review out of marketing research as ex-willing consumer. Initially I thought that it is Made in China and has lot of sensors. Arduino Multifunction Shield has 4 digit 7 segment led display, 4 SMD led, 10k potentiometer, 3 push buttons, buzzer and lot of interfaces. It is not Made in China, it is just a costly thing with very less features. $2 would be correct price for it. This is the original company :

Arduino Multifunction Shield is good for the children. It is also ideal for low IQ adult humans. 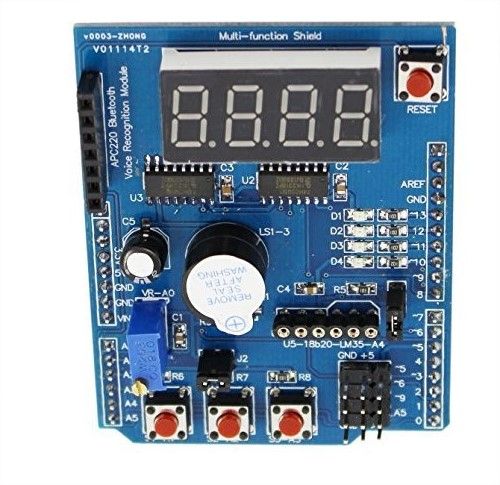 It is basically a daughterboard with few basic electronic components including a display like TM1637 LED Display. Indeed TM1638 Display Module is far better unit. Except China, Korea, Japan none can make anything good a lower price – their average IQ is far higher. Russia makes few things great. You can build a good daughterboard with the components.

Thats it. Others are for connection (interface), they are not components :

They have some snippets to give examples (how funny, they asked to give credit for these few lines) like this is for push button with computer’s serial display :

In this way, we can also sell Arduino shield combining with LED clock with traffic light with timer with some servo motor functions, rotary encoder.

This Article Has Been Shared 708 Times!