Advertisement
You are here: Home » How to Create an Android App and Host It on Cloud?
Advertisement

Creating Android App actually easy and only needs huge knowledge of programming. The Reason to Discuss How to Create an Android App and Host It on Cloud is For Sharing the Resources and Tricks to Make the Steps Easy to Any Level of User. In case, you are new to Android application development, you simply need to install Android Studio and read the documentation :

We do have old easy lucid guide to create Android App. There are many guides, videos on whole internet for helping the newbie.

How to Create an Android App?

Android not really Free/Libre Software (often many erroneously refer free software as ‘open source’) but has too many propietary matters. So the way of development with Android Studio will be like Microsoft or Google’s many proprietary stuffs with API. Android Studio will not take more than 1-2 days for a begginer to get used.
There are Third Party Tools to create Android App, like we discussed in an older article about App Inventor.

As Android tries to deceive as Free/Libre Software, many features are like Free/Libre Software. It is possible to edit an Android App. Editing means, editing the compiled APK file. That way is also good for personal usage of some applications with lot of junks. I guess, many will find editing a good foundation base.

However, instead of editing (that is kind of reverse engineering), one may look at the real F/OSS Android applications projects, although still limited in number, but there are enough good resources including samples :

As F-Droid is about Free/Libre Software, you need not to reverse engineer. If you follow the below illustration, in the above paragraphs we talked about the left hand sided matter : 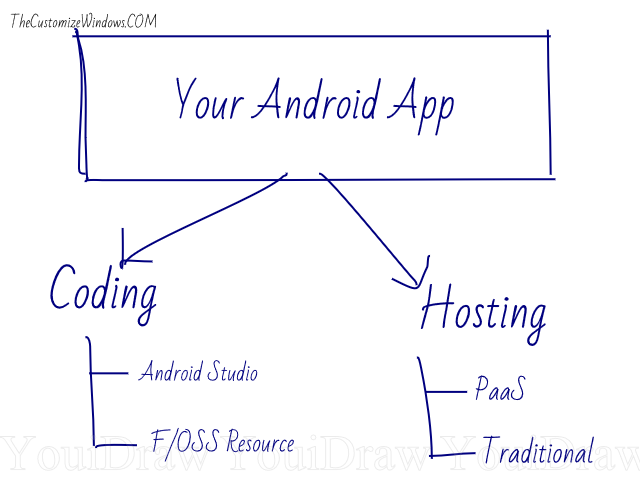 How to Host an Android App on Cloud?

Obviously, many applications need a backend. In that case, the traditional approach is using own dedicated server or virtual server like we are using to host this website. However, with time many cloud services developed which does the work of Android Application Development and Hosting. One of them is IBM Bluemix (now IBM Cloud). Quite advanced applications can be created using their tools, and usually they have own guides :

IBM is an example, there are many similar services. There are many matters needed to think and learn before jumping to opt for such services.

Although the topic How to Create an Android App And Host an Android App on Cloud appears to be for the newbies, the topic is not exactly easy now because of increasing complexity of the applications and increasing number of hardware features of the devices. In this article, we provided an overview of the total matters for creating just an Android Test Application to Machine Learning Powered Android Applications. In our other articles we discussed around Building Cognitive Applications with Data Science Experience. We hope that all together will provide an informative overview to get started.

Articles Related to How to Create an Android App and Host It on Cloud?