For windows, download only the first two packages, uncompress them and copy / cut them to C:/Windows folder :

We are using Console2 with Windows CMD as Shell. There are lot of Console2 Guides within this website, you can read later, like Console2 Customization and UNIX Functions, Colored Text with Syntax Highlighting Translucent Console for Windows , like that.

Where, test.apk is your App which will be edited, Console2 and the App (test.apk) are in the same directory. For our case, it is Desktop : 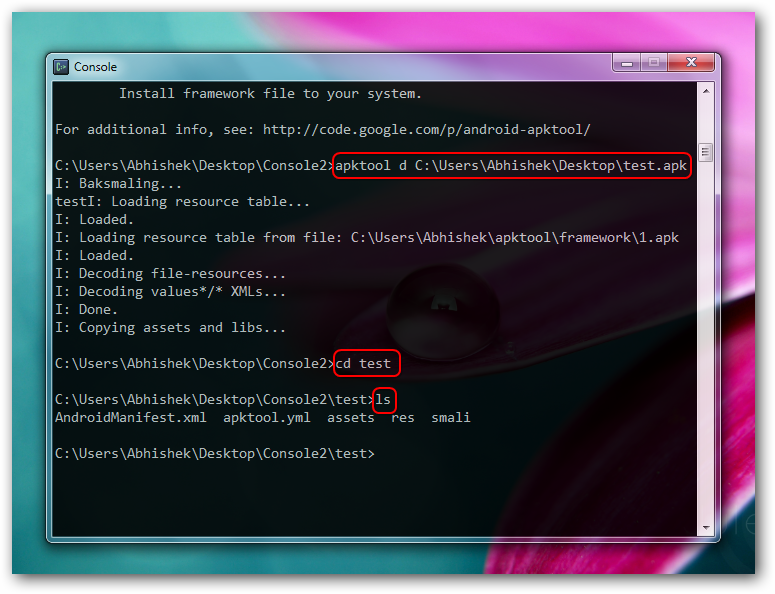 All files of apk will be unpacked within an App named folder inside Console2’s directory, thats what we need for editing Android App. Like in screenshot, you can work from command line, if you have full Cygwin setup or can use Text Editing tool like Gedit for Windows open some files. The later part is actually related to Android development. The command line will give some tips itself.

It is basically a tool kit for Reverse Engineering. You can work to create from those apps using Open Source cores and selling them at high price, they are detrimental for GNU spirit. You must develop the app fully yourself, use proper GNU license, distribute on Google Play, GitHub etc. Editing Android App is for contribution to Free Software Projects, destroy closed source devils. Do not use for pure hacking.