Advertisement
You are here: Home » How to Add WiFi to DSLR Camera For Live Shooting, File Transfer
Advertisement

WiFi has been almost a standard to stream, tether. Sadly, Still Not All DSLR/DSLT Camera Has WiFi. Here is How to Add WiFi to DSLR Camera For Live Shooting, File Transfer at Cost Effective Way. We are talking about cheap but not exactly DIY ways. There are some other solutions at higher price.

How to Add WiFi to DSLR Camera For Live Shooting, File Transfer

This is just easy, cheap and works almost all DSLR manufacturers – Canon, Nikon, Sony, Olympus, Casio to name a few.

Orginally there were W-E1 Wi-Fi adapters available which is an accessory installed in the SD card slot of the camera body. They are commonly known as Eye-Fi cards. Eye-Fi was originally for having WiFi enabled with that SD card with 16GB and 32GB capacities. Eye-Fi Cards are compatible with almost all the digital cameras manufactured after 2010. Manufacturers include Eyefi firmware built into their cameras. Eyefi supported cameras are able to control various functions of the Eye-Fi Cards like they can turn the WiFi feature on/off. If your camera is Sony A68, then performing a web search with the phrase “Eye-Fi Sony A68” will throw a clear cut idea whether Sony A68 supports that feature at all and if you are lucky you will get some YouTube videos. However, cost of Eye-Fi is closer to cost of entry grade DSLR! Eye-Fi Card transfer speed is typically about 2MB/sec, this card can push so that you can receive new images on the mobile device while shooting, it’s base is properitary software which requires online registration. RAW is supported only in Pro Version of card. There is security vulnerabilities of the old version.

Now, in the market there are at least two “Eye-Fi Card” like cards – Toshiba Flash Air and Trancsend Card. Both costs like cheap China stuff compared to original “Eye-Fi Card”.

If your camera is Sony A68, then performing a web search with the phrase “Toshiba Flash Air III Wireless Sony A68” will throw a clear cut idea whether Sony A68 supports that feature at all.

Toshiba Flash Air III dirt cheap, all you need to do is download and install the Toshiba Flash Air app from PlayStore, load the card into the slot in the camera, turn on the LiveView mode (or do equivalent), open the App and search for card. Toshiba cards seem to eat batteries less, although the effective range seems shorter.

Of course, humans has curiously hacked those cards to see what sci-fi story is inside :

You can invest time to read the comments on the above webpage. Humans are trying huge with cheap ESP8266 to make real open source DIY Wi-Fi adapter for DSLR.

It is a dream like thing – a module which plugs in to camera’s micro USB port. Nikon WU-1a Wireless Mobile Adapter for Nikon Digital SLRs is best and at this moment only better example.

I lack idea about CamFi, although that is similar. CamFi has support website for sales : 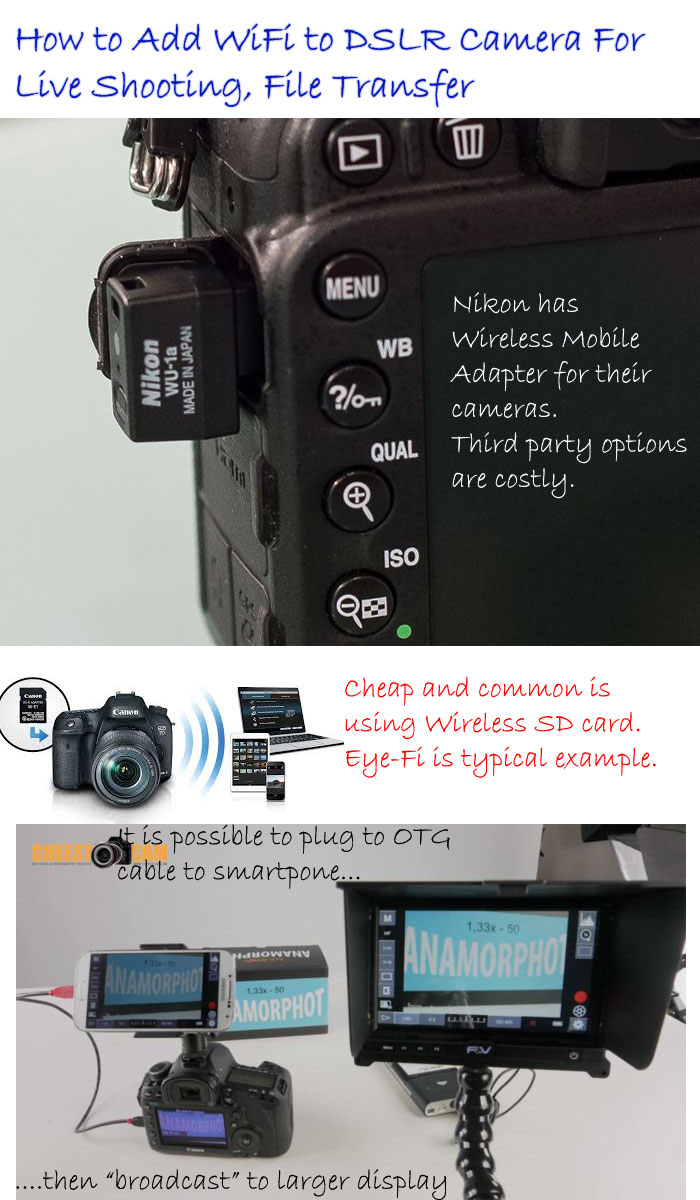 We discussed about DIY OTG Cables. China OTG Cables does not cost huge. You can plug OTG Cable to Android Phone and DSLR, install DSLR Controller Android app. The app will work as a preview monitor for limited number of DSLR models. If your large monitor has Wi-Fi support or you have Chromecast device, you can see live preview wherever possible in more sophisticated way. There are DSLR Smartphone Hot Shoe Flash Camera Mounts available for mounting smartphone on DSLR bodies.

We think that Toshiba Flash Air III is easiest way for various reasons (of course slow). Even if it’s Wi-Fi does not work, still it is a memory card. Poorman’s Way With OTG Cable is no way bad and not at all camera manufacturer dependent.

Articles Related to How to Add WiFi to DSLR Camera For Live Shooting, File Transfer