Advertisement
You are here: Home » How to Run Docker on Windows 10 (Consider Real Bash)
Advertisement

Yes, Docker runs on Windows like Bash runs on Windows. So you can actually try our guides for Docker intended for Mac or GNU/Linux PC. Here is How to Run Docker on Windows 10. It is possible to run Docker on Windows with Linux sub-system, bash but you better use free GNU/Linux for security reasons – neither Docker is a Free Software nor Windows is a Free Software. Microsoft Windows possibly try to restrict applications according to their need. You may end up doing too many works. Also, normally peoples use GNU/Linux server; it is worthless to waste time behind odd way instead of just having a dual boot.

How to Run Docker on Windows 10

There are different guides on web around the installation steps. That is because, for different time frame different ways discovered after Microsoft Windows did some changes to make Docker in bash way more Linux like.

Exactly like Linux, you need to run few commands from Windows Bash to install Docker from command line :

will return what exactly happened. Next step is by testing running :

You can not really force to try more than using sudo. You can check whether there is Go:

You can run this command to leave the daemon running in the background, and with the Docker ready you can test that it is accepting commands :

Try to install these packages :

If both Windows installer of Docker and command line way ails like below screenshot, it is very difficult to actually get Docker working (it does not worth the effort) : 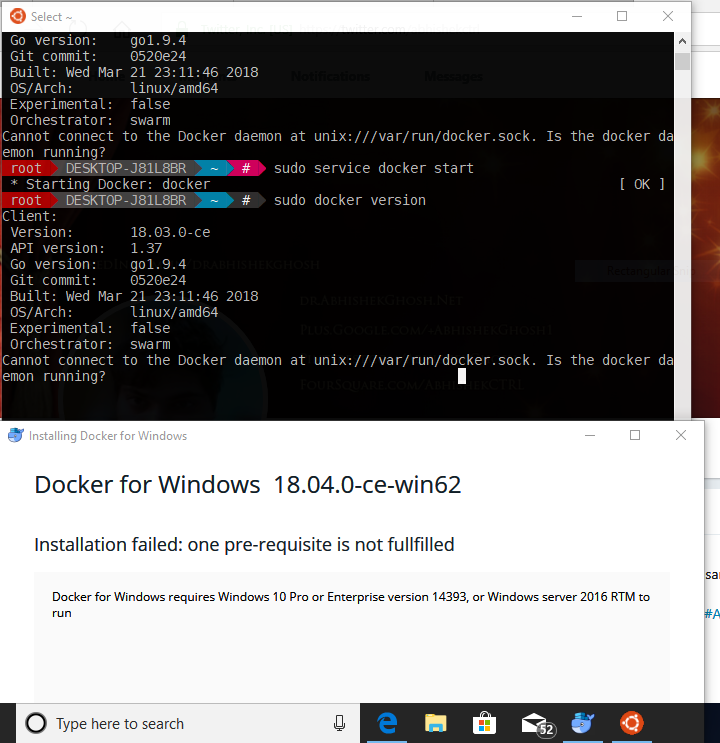