Advertisement
You are here: Home » Turn On LED in Dark With LDR and Arduino
Advertisement

Why we are going towards apparently easy tutorials on Arduino than couple of years back? These basic projects with components are helpful to learn using sensor based logic. Was not LCD with LDR was difficult project? Why Automatic LED Control Using LDR and Arduino looks simillar? Our older guides were mostly just using modules with libraries and this guide has more at the end for creating complex projects. For future complex projects, we need the users to get used with handling the basic electronic components and manipulating code with understanding. Here is How to Turn On LED in Dark With LDR and Arduino. Very easy circuit diagram with minimum components. Here is small video on how the thing will look like :

We need the following components : 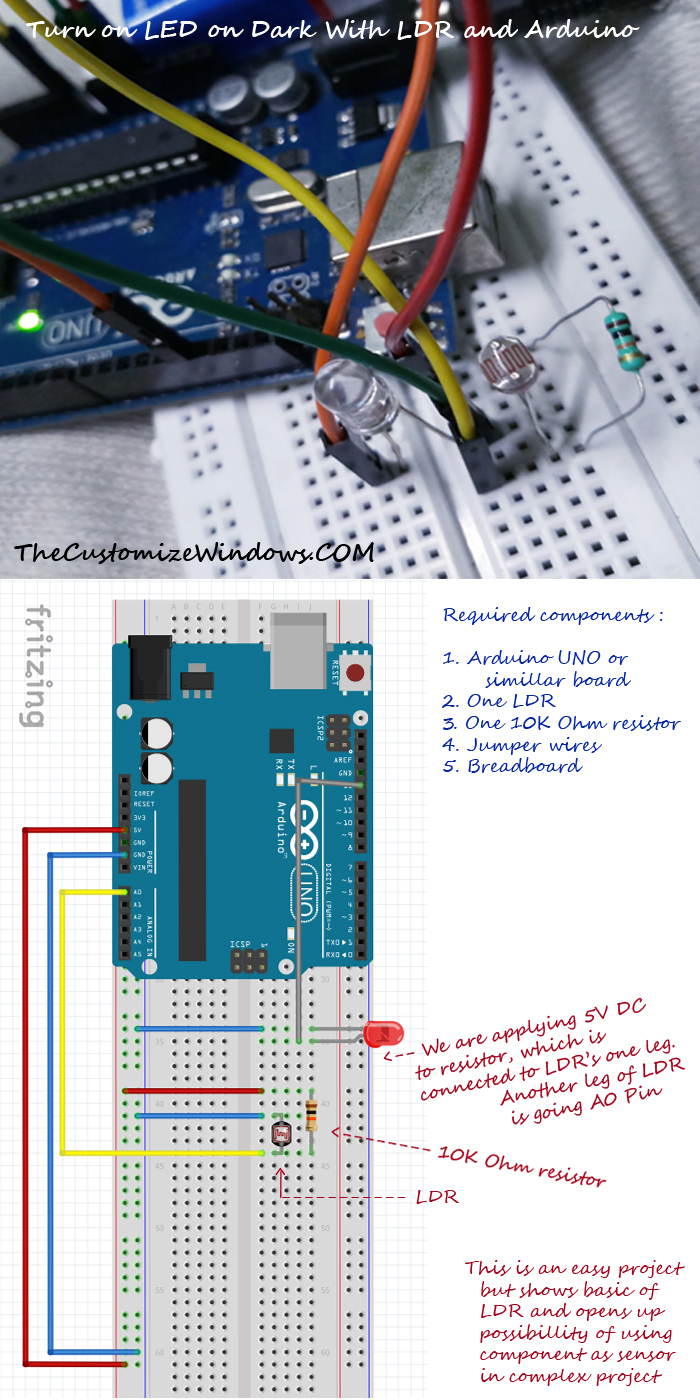 Open Arduino serial monitor and get values of reading at room, at dark and sunlight etc. Now, this is our final code for the thing we need :

I set the (sensorReading<1000) based on my available light's reading on Arduino serial monitor. The mechanism how the values are being printed is described in Arduino Analog vs digital pin.

So, for your need, (sensorReading<1000) may be lower or higher than 1000. Secondly, you can add multiple LEDs by simple modification.

In real life, we need this action for electric lights. That will need using an Arduino relay module.

So, with one Arduino, one LDR, one resistor, one relay module, we can actually control many household bulbs in real life. Commercial unit for the same action would cost higher if you build the Arduino from components or use cheap China clone. Furthermore, you can adjust the value for different seasons.

Tagged With circuit to turn leds on when dark , using C language how to setup the density of LDR using different lights usinjg DELAY 5000 , turn in using ldr arduino , simple code to turn on led when ldr is darken , photo resistor included in the Arduino kit to turn on LED’s when darker , LDR makes LEDs light up in arduino , https://yandex ru/clck/jsredir?from=yandex ru;search;web;;&text=&etext=1828 dbpAPHYF1XtFDHAyXT8GQxKdsmacwunBUMiQATXBJs-1HJeW1wDn0X8un-V5Y1IA bcc566f1b0012ce97e392cc551f6db85dde09b19&uuid=&state=_BLhILn4SxNIvvL0W45KSic66uCIg23qh8iRG98qeIXme , how to make an led darker with a photon resistor with arduino , coding for ldr to turn on an led arduino , arduino circuit with led and ldr