In this article, we used Europe/European, EEA, EU to mean where GDPR is effective. We always protest against Google’s participation in NSA Scams, but why now we are sounding opposite? Definitely we are not firing innocent common men Europeans. They must not feel our writing as racist attack. It is for their Kings, Queens who ruled and ruling their earth. This Article on GDPR & Non-European AdSense Publishers is an Important Topic For the Webmasters. Europe, historically the worst region for the whole earth from point of colonization. After Mid-1900s, most forgot the History Books as history and continue to “be-friend” and expand the businesses. Unfortunately, Asian and American businesses has high investments in Europe. Google is an Unfortunate victim like thousands of such making their publishers victim. Instead of Google, it could be Panasonic, Sony, Tata, Reliance or a cheap China electronic component selling company. The question is becoming like – “when using Google AdSense, work yourself”. That methodology Google adapted since advent of responsive ad units. That is Google’s immoral part. Google actually should arrange generation of codes themselves with full examples of JavaScript.

Relationship of Non-European AdSense Publisher is only money as third party tool. Without such companies, it is really difficult for most websites to see earning because simply a cloud computing company will not know us, nor have a somewhat fair pricing. All webmaster will want just copy-pasting Ad on their site. These companies actually should not bother more than quality of content for their Ad customers. Different sites may have different policies.

The essence is – None can track the Europeans in any manner is the essence of the sections. Does not it sound like mid-1500? Whole earth was made colony by Europe as Europeans needed comfort.

Google AdSense popping message on your dashboard or sending message for GDPR compliance as your website is baiting Europeans. If you suspected to steal data, Google’s Europe unit will be fired. Google have to warn or kick out you.

You thought that you have no direct business operations in the European Union. Legally wrong. You are using Google like non-European Companies for various web services including CDN, DNS. You designed your sites in British spoken English to bait them to search. Is it possible for a small to medium site to avoid so much legal and coding troubles? Yes, but with some loss of earning, adjustment of business model.

For sites more than 10000 hits/day only from EEA

You have to create a subdomain for EU, make exact copy of original international site. Then redirect all European traffic from webserver level to that EU subdomain. That subdomain needed to be fully compliant with GDPR. We suggest to make it Ad Free. Offer them reading as paid membership site. Technically, you should not deliberately target the Europeans to the non-compliant international domain via Google AdWords. On main site, wrap the AdSense units with PHP conditionals to not show to EEA. There are several WordPress plugins which does that job on the fly. On main international site, on sidebar, have clear-cut declaration that the site is not for EEA and point to subdomain for EU. Google AdSense is enough intelligent to understand your plan. Of course if Google had some way to give declaration of not serving Ads to EU traffic, that would be great. From Google’s documentations, clearly Google is not thinking of non-EEA users :

For sites less than 1000 hits/day only from EEA

Switch to Non-personalized ads. You need not to get frightened with so low traffic. Add a clear text on sidebar like us informing your site collect cookies, link to policy, describe way to clear cookies. 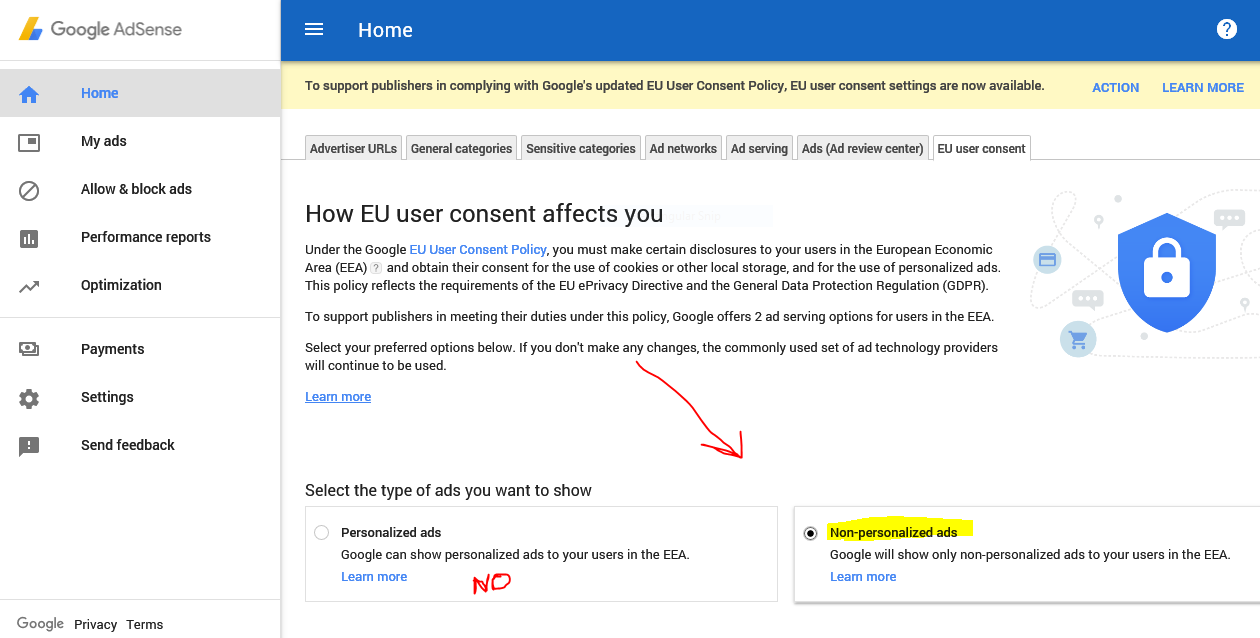 Adsense bots likely to follow that link. By any means – do not try to appear as content is mainly for EEA (i.e. do not mention currencies in Pound, Euro but USD). A clear writing of non-GDPR compliance will not harm you. If Google AdSense feels wrong, initially they will send hardly minor policy violation notice. You’ll likely to have way to connect them via email OR simply you can add pop-up to take consent.

In future, target US and other non-EU countries for traffic.

You can actually get high niche traffic from India like countries with commonly lower CPC. You need to avoid the traffic who not going to buy a product.

What if I am from EEA?

If your customers/visitors are from non-EEA, you can open business in non-EEA and operate through it. Lawyers will know methods to circumvent.

Why GDPR Compliance of Whole Site Not Practical

You understood the plan – make your main international site “Europe free”. Because to be compliant with GDPR, your site will fail in page speed. There are countries with lower bandwidth. Definitely you do not want complex coding of Ad codes, adding CSS, JavaScript to show a pop-up to non-European to lower down CTR. It is terrifically difficult to code AdSense to correctly switch to European version ourselves – it is what Google will engineer later for sure. OR may be, Google may change business plan like in China. Does server log, Fail2Ban violates GDPR – unknown.

Google trying to help the publishers but really it is complex task for Google.

No. You are actually forced to change business model. Furthermore, it will invite less sponsored posts from Europe. It very difficult to perform SEO works for another sub-domain. Invariably you’ll loss some traffic. But you are thinking to somehow manage and pass GDPR is worse idea. If you are a high traffic site and single owner, what can result out of sudden complain by an user finding out flaw, we really can not guess.

GDPR is least about protecting citizens, it is more about non-European businesses in Europe. Privacy matter is just a tool. They are not promoting Libre Hardware, Libre Software. Obviously, Richard Stallman delivered lecture in typical manner :

Richard Stallman will not want that a small publisher suffer troubles.

We are not lawyers. You probably need to talk with lawyer and make the plan fail-proof. We are not more than AdSense publishers, we ourselves not expert about complex AdSense policies. But manipulation of Ad codes is more risky.