As described in previous articles of this series, the Instance-Based Learning is based on instances. These are described by n-many attributes and represent a point in an n-dimensional instance space. Each attribute is defined by a set of ordered numeric values ​​as well as unordered symbolic values. Supported by methods such as supervised learning, Instance-Based Learning (IBL) algorithms also learn a concept of something by entering training instances that are already classified or categorized.

Course of the Learning Process

Algorithms based on instance-based learning basically consist of the following four functions:

The first function normalizes each numeric value of an attribute to allow the second function to assume that each attribute has the same range of possible values. Once a new input is made, repeated normalization is required.

The second function returns a numeric value that expresses the degree of agreement or commonality of the new instance versus the classification of the concepts already known. This is done by a simple commonality function such as the inverse of the Euclidean distance between two instances x and y, where n is the number of attributes.

The third function uses the values ​​obtained so far to make a prediction of the most likely values ​​to be expected. The prediction function for the numeric values ​​then calculates a weighted similarity to the most similar instances.

In the fourth functional step, the memory of the algorithm is finally updated, i.e. all processed and updated training data are written into the target concept.

Use in Handwriting Recognition

After a scanner has scanned, binarized, and saved the text to be processed as a bitmap, the system searches for lines. Rows in this context are basically rectangular areas containing sequences of letters. A page is thus separated horizontally by lines. Once all rows have been found, they will search for more rectangular sub-areas that will vertically separate the rows and contain isolated letters. The next phase is about learning. Each found letter is normalized in an area of ​​the bitmap which is 16×16 pixels in size. If one letter can not be correctly separated from another and normalized, it is possible to manually set the boundaries of the letter to other letters. The obtained 16×16 bitmap now receives a numeric code. A normalized letter is represented by 256 (16×16) dots. Each point can assume the state 0 (white) or 1 (black). Since letters can be scanned from texts in various resolutions (dpi) (75 dpi – 600 dpi), normalization into a 16×16 pixel bitmap is inevitable. For each of the 256 points in the normalized bitmap it is necessary to assign a corresponding part of the letter.

Letters can be classified in different ways. The system described here (“template matching”) uses five methods to compare the normalized bitmap (ie the known instance) with the bitmap of the input letter: 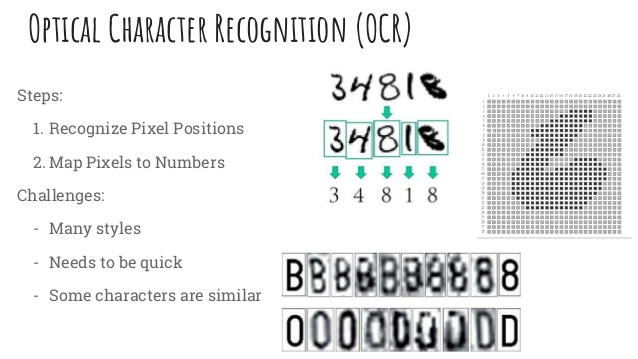 In this scientific work, it has been that explained how today’s text recognition relies on machine learning and it’s effects on the successful recognition of texts. In the analysis of largely English technical contributions, it quickly became apparent that machine learning has no insignificant influence on the quality of text recognition. While in classical text recognition of machine typeface the systems still manage quite well without learned knowledge and are usually limited to pure comparison methods, it is almost impossible in the recognition of handwritten characters to correctly recognize these without experience from previous analyzes, so that In this case, different learning methods are used, which are no longer based purely on comparison.

It can also be stated that, above all, instance-Based Learning is very well suited to the recognition of handwritten characters. Depending on the quality of the graphics to be read, this method still achieves an accuracy of more than 80%. For printed characters, almost 100%. These values ​​will continue to increase over time, because every time the system rediscovers a character or reads it out for the first time, it trains itself. If you then add the context-based correction to the whole then the accuracy would improve again not insignificant .

In the present day, when artificial intelligence and machine learning already have a big impact on our lives, machine learning in text recognition will evolve. Thus, in the future, further artificial intelligence technologies will be developed, which are expected to provide even better analysis results. It can be surmised that these technologies will continue to evolve until they can guarantee a 100% correct selection.