Cache plugins designed to decrease load average of servers running WordPress. But, There Can Be Situations Where We May Face WordPress High Load Average With W3 Total Cache. In Such Case, We Need To Use WP Super Cache With Other Plugins. It is not always possible to troubleshoot everything but it is important to run a security audit, check any missing PHP modules.

Why You Can Face WordPress High Load Average With W3 Total Cache?

Most of the server software are designed for traditional dedicated server. There are many types of virtualization. All of the types practically emulate the resources including CPU core. We actually have many packages including MySQL, Apache2, PHP and work load for TLS/SSL. Depending upon the virtualization result may look like DDoS attack. Typically PHP via Apache webserver may start to fork processes guessing the work load by W3 Total Cache. We will see multiple www-data processes running. How much load average you should allow? There is no hard and fast rule. But keeping it below 1.0 for dedicated servers is the norm.

W3 Total Cache should work great in most setups, however higher load average like 10 are not good figures. Many webhosts will not allow uncontrolled loadaverage over 2.0 for many hours. Such instance may collapse the whole cluster. 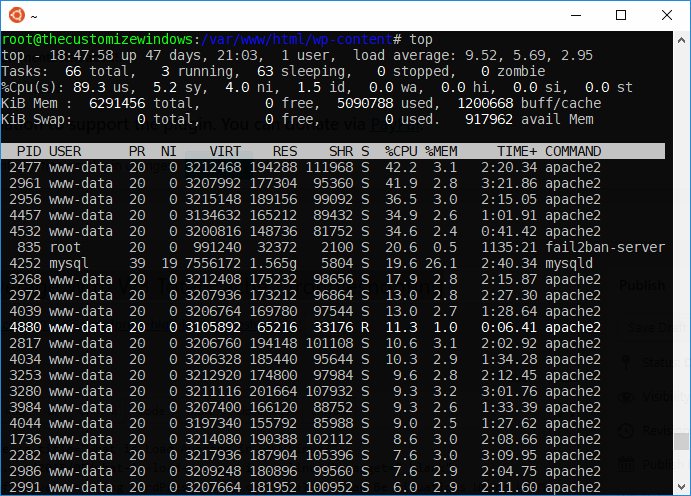 We need to check the cache whether working :

If they are fine and deactivating W3 Total Cache returns load average to normal, we need to install WP Super Cache. However, WP Super Cache alone may not be enough. It does some works which solve many works like using CDN, basic caching.