Advertisement
You are here: Home » How To Install Memcached on Ubuntu Server And Configure WordPress
Advertisement

In previous guide, we installed APC cache on Ubuntu 18.04. Here Are The Steps On How To Install Memcached on Ubuntu Server 16.04, 18.04 And Configure WordPress To Optimize Page Loading Speed. APC is an opcode cache. APC cache chunks of PHP code and stores it in RAM. When we need to run that same piece of code again APC already cached it and runs from memory at lightning fast. An opcode cache is one that compiles the plain PHP code into machine code (opcode) and then stores it in the compiled form for future requests until it detects the original PHP file has changed. This means that PHP does not have to run this compile step on every single request, saving some time.

Memcache or Redis are in-memory data-store, used as a cache for your WordPress site data. Although both are cache system and sounds closer, they are technically not same. Everything really depends on your server. A cluster of small servers at lower cost can distribute load and make site load loading almost instantly. APC does not share the cache with other servers but possibly it is faster to cache code.

Steps of How To Install Memcached on Ubuntu Server

First install the dependencies, search apt with php72-devel to find some php-devel for your version of PHP :

Add this line to php.ini under the php version you installed memcached php (like :/etc/php/7.0/mods-available for PHP 7.0) or under Apache’s php.ini directory (like /etc/php/7.0/apache2/php.ini) :

If you have Apache2 running, then reload :

So the effective settings file is /etc/php/7.2/cli/conf.d/20-memcached.ini. If you run just : 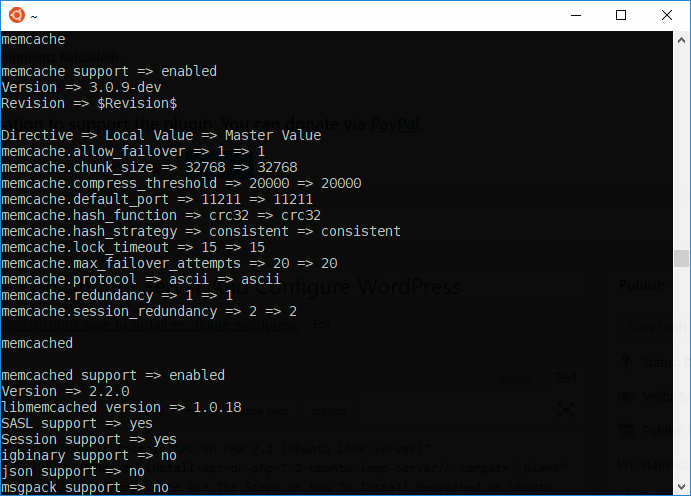 How to configure WordPress with memcached has been discussed in the article WordPress High Load Average With W3 Total Cache.

If you are not using W3 Total Cache, you just need to install WordPress plugin like Memcached Redux, instead of activating it, copy the object-cache.php from plugin directory to wp-content directory.

This Article Has Been Shared 785 Times!