Most of the mid range DSLR/Mirrorless camera like Sony Alpha A68 has 4K capabilities, but editing on 15″ monitor not always easier. Moreover, with time a television with ready to run YouTube, Amazon Videos, NetFlix or quickly sharing screen of even entry level Android smartphones such as Samsung J7 Max, Vivo Y71 becoming a regular need. Here is Review of Samsung NU7100 43″ TV/Monitor. Key Features of This Series Are – UHD, 4K, Smart TV With Tizen OS, Wi-Fi Capabilities and Decent Speakers. At the same price range, we have Sony and LG as alternative options. Samsung NU7100 43″ TV is not exactly top notch but does the job enough efficiently at present and better than Sony and LG for various reasons. Even if you buy a separate 43″ 4K monitor, add Raspberry Pi running Android Smart TV OS, add Google Chromecast, that not going to cost any lesser, difference of total cost will not be lesser and result not so compact. You can always run Android Smart TV OS with Raspberry Pi, even with Samsung NU7100. That setup will allow you to manipulate addition of extra hardware & sensors and also offload some processing works. It’s big hardware limit is 60 Hz refresh rate. 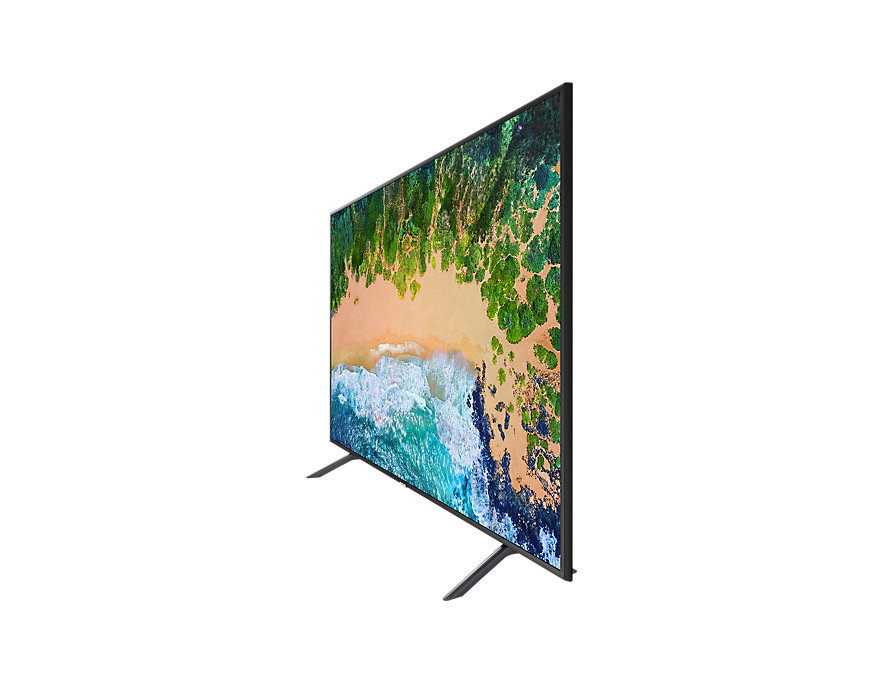 The package contains pair of plastic stands with faux metal finish with screws. That is the first thing you will need to setup. AC connection plug is smooth, located at the back almost in the middle. Other accessories provided are 3.5mm audio and A/V composite RCA converters for output. It has 3 HDMI input, 2 USB input, 1 Ethernet port, 2 3.5mm (audio and A/V) input, 1 optical audio output and of course input socket for analog terrestrial antenna cable. Most likely you’ll need to buy an RCA to optical converter to support relatively lower end and/or old 5.1 home theater system. You have no way to get direct 5.1 sound output from the set. When Samsung NU7100’s connectors compared to same range sets, the audio output part is feeble.

The back of the TV looks like that of high end models with cable management tracks spanning the entire width of the back of the TV, two clips to attach to the stand legs. It has 4 holes for VESA 200×200 wall mount. Samsung suggests on the booklet to tie a string with wall while using the stands. The stand enough sturdy, the set enough balanced. Yet, for a few feet tall display with ports behind, it is practical to use the stand and tie to secure it in place.

There is a power button and red LED at the bottom of the middle part which works as digital switch to off/on the set as well as bring a menu consisting of basic buttons of a television.

Samsung beats the rest of same range at LED edge lights, apparent contrast, black uniformity, color and up-scaling. Samsung NU7100 is quite smooth with 4G/LTE connection. Not even a single sentence written about it’s on board computing unit more than it has quad-core processor. But the set apparently no less powered than a mid range Android mobile phone. The remote control unit is old fashioned, sporting rubber buttons and delivers a feel of cheap set. The remote unit was good if sold with such unit back in the year 2000. The speakers are not bad but some external robust speakers is a definite need.

Screen-casting application is available on Google Play Store and Samsung Galaxy J7 Max supports the app. The sync, playing video is enough good. When the display of Samsung Galaxy J7 Max is projected on the television, it tells the story – Samsung Galaxy J7 Max has crisp display with more coverage of colors. It delivers a feel to slap own-self watching the lesser color of home screen of Samsung Galaxy J7 Max’s default theme. Yes, blue-green has quite higher difference, red is too much. But you paid 1/4th compared to the most costly model. I believe that the pricing is correct and sober than some “HD Ready” sets of same price range. You’ll become happy to watch your recorded 4K videos.

Rest is of the operating system – Tizen OS. It has an Internet application, YouTube, Netflix, Samsung Galaxy (to sync with Samsung gallery of Samsung mobile phones) etc. As it has a kind of market place of Apps, it is not big deal to install a video player of own choice. Do not expect Tizen OS to have Android like wider range of applications, it has only decent number of applications. It is probably a stripped down version of Tizen OS to make it working smoothly with the hardware. Manuals, settings are enough good and follows the philosophy of Samsung’s Smartphones. Right out of the box, the the set’s memory space is 75% full with pre-installed apps like Netflix, Amazon Prime, Internet etc and you just can not uninstall them. You’ll try to find way to root it, but simply the number of users not so high to root Tizen TV OS.

Gaming consoles are smooth to work. Lag is unnoticeable.

Rest is about Keyboard & Mouse support. It depends on the running application. The Tizen OS running on NU7100 apparently designed not to support wired USB mouse or wired keyboard, unlike unlike just any Android mobiles but it supports OTG – Internet application supports any wired mouse and/or wired keyboard. We have not tested with wireless.

The screen loves dust, finger prints. Consider to use the tools of lens cleaning set.

It is a good set but probably more good if a Raspberry Pi or ROCK64 single board computer is used with it. Of course more costly computer option is better and graphics will be rendered smoothly. Samsung probably not sure about the user base of this segment and tried to go in-between “smarter” like modern smartphones and old fashioned television sets. They are over careful around terrestrial antenna (which I have not used in last 2 decades), ready to offer satellite TV on and running. The remote is a solid pain to type emails, passwords to connect the accounts or search on YouTube.

At some features, it looks too cheap (it is actually cheap), however going to higher range at this moment is quite risky.

This Article Has Been Shared 229 Times!