Probably you have read many reviews of Vivo Y71 elsewhere. But most of them are not closest to perfect. These days, “assembling” smartphones is not quite difficult. There is Android OS (which needs some payment to Google for commercial production) for just installing and selling, GPU technology of Smartphones is SoC based. Here is a Review of Vivo Y71. An Obvious Comparison Comes With Samsung J7 Max, Which is Not Many Long Away in Terms of One Time Investment. Vivo not exactly “premium” yet now, neither the cost is lower like some other China brands. What are the unique points of Vivo Y71? Who should buy Vivo Y71?

Vivo Y71 probably will appear bad, overpriced to a MacBook Pro user, even to a Samsung J7 Max user. Vivo’s FunTouch OS actually not targeted to the segment which Samsung, Sony targets. We like smaller, crisp fonts; nice UI animations, more security features to “hide” a Whatsapp messaging. Samsung J7 Max is powered by MediaTek Helio P20 chipset. It’s drawbacks are tons of bloatware installed, pathetic quality of music and of course slightly higher price. Whatever official specification goes, at that price Samsung J7 Max offers neat, crisp display. That is expected from display expert Samsung. It’s good point is the finger print scanner. Samsung probably designed it targeting who will need to do some office works on the go. Samsung tweaks the default Android distribution and end result is pleasurable UI. If you are young, used with good displays, looking for a midrange smartphone to perform office works; then Samsung J7 Max is correct for you. Samsung J7 Max demands a seasoned computer user to extract maximum out of it – it is not easy to hold, forget about rooting. It forces installation, un-installation of many apps to check which works better. Samsung J7 Max is good example of “phablet”.

Vivo’s screen in reality feels bad than specification due to low DPI. This forces a young, used with computers to hate it. Ultimately result looks like cheap Made in China clone of iPhone but it has some interesting features. Your grandmother, whose age towards 90s, will be unable to understand the fineness of Samsung J7 Max. That sense is matter of ageing. We should offer them easy to use Android phones. You should think that your grandmother does not forget how to initiate a call than appreciating great UI of Samsung’s whole series. Vivo Y71 is not for me. But that does not make the genuine effort of Vivo’s team bad. Their product has unique features.

Vivo Y71 probably is designed for three segments – first is the old peoples who need easy way to initiate a call, second is those who are looking for a smartphone with decent hardware (at that price) for playing music, third those who want to avoid Google’s forcing of giving email. One can actually avoid any kind of registration with Google provided that alternate apps used for map, geolocation, email, downloading apps.

Vivo probably given importance to improving the code of OS instead of light tweak of stock Android. Vivo Y71 uses
Qualcomm Snapdragon 425 chipset paired with Adreno 308 GPU. The chipset is older and thus suits smartphones of this price range. In is lightweight, comfortable to hold. It comes with screen protector installed. It is not difficult to keep in in pocket.

Vivo Y71 better be viewed from point of software development. Vivo Y71 uses Vivo’s fork of Android – Funtouch OS. Funtouch OS has some customized gestures, bottom to top swipe, lock screen resize, long screen shot etc features. Funtouch OS does consume more space compared to Samsung’s tweaked Android. It seems that Funtouch OS has coding part which tries to free up keep freeing RAM. It has a game mode, which probably overdrive that forcing. We are not going deeper to origin of FunTouch OS. Different manufacturers has such kind of forks, Like Huawei uses EMUI.

Because of Funtouch OS, drawing “C” over screen when Vivo Y71 is sleeping with screen turned off makes it to go to wake up and open recent calls with dial pad. After drawing the gesture, the screen shows what pattern was drawn in an animated way, in white color on black, dark screen. It looks great. In the same way, there are some other gestures like drawing “M”, drawing “@”. Also tapping the screen when it is sleeping with screen turned off makes it to wake up bypassing screen lock. It is “n00b friendly”. You can set the volume button to be pressed twice to turn on LED to use as flashlight while it’s screen is sleeping as black dark screen. These features are turned off by default.

How is Vivo Y71’s music? Well, you need a good headphone or good earphone. We suggest dedicated portable music players for playing music. However, neither purchasing lot of devices nor carrying lot of devices is practical for all. What is supplied with the package is of inferior quality suitable only for voice calls. We have not tested with FLAC (that should a separate article), but higher bit rate MP3 with Sony’s professional grade headphone sounds pretty after some tweak. Vivo Y71 has own music player. You need to turn on “Deep Field Effect”, select sound effect for deep field effect. Then you have to match closest kind of headphone to get best from the mobile. Do not give importance to just anyone saying “Vivo Y71 sounds low volume”. Their earphone, headphone not supporting hardware noise cancellation and sounding bad. For a low budget person, Vivo Y71’s hardware is enough good provided that a $100 to $300 headphone used. However, if we compare the player with Nokia N73 ME, it will go closest by quality but will fail in features; it is towards Sony or ZTE’s Dolby sound effects. Nokia N73 ME has control for balance, few features make it pointing towards good default music player. May be you need to find some music player with more coding to optimize the “Deep Field Effect”. It seems to me that they hacked hacked Qualcomm Snapdragon 425 chipset nicely. Many China brands manufacturer good mobile stuffs for music. Qualcomm Snapdragon 425 is designed to deliver a huge performance punch with 192KHz/24 bit high-fidelity audio, and Qualcomm does have hidden key features including a dedicated customizable digital signal processor (DSP). Other China brands including OnePlus, Oppo has collaboration with Qualcomm. Vivo Y71 needs research with some hacked music player from other brands enhancing Qualcomm’s sound effect. Sony Xperia uses own chipset. That FunTouch OS is used to extract good quality music from other other phones by “hackers” :

It is not easy to hack that default music player to make it supporting some extra features.

Other hardware of Vivo Y71 do not worth mentioning, these days they are commonly found as standard hardware – 3.5mm audio jack, USB OTG, good front camera etc. The camera has less wider aperture than closer priced models, although good. We always suggest a dedicated camera for photography. 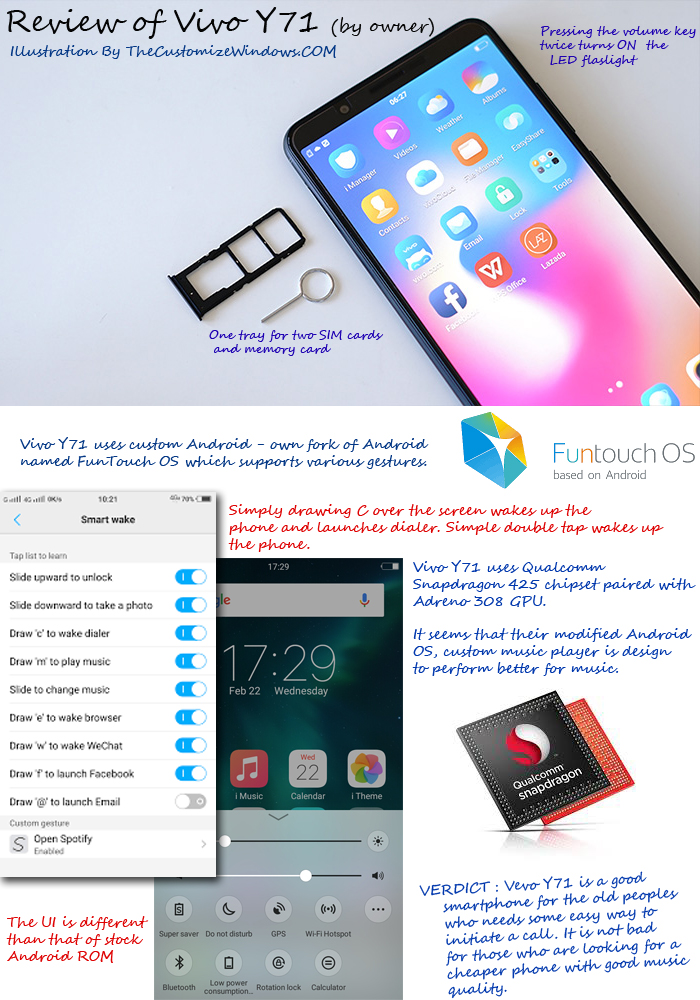 Vivo Y71 does the basic function expected from a phone nicely. Vivo’s FunTouch OS actually do many good works and make it suitable for the old persons who need to tap few times to initiate a call, hold it comfortably, activate the LED flashlight easily. Do not compare with other manufacturers by using some sets of application. Next segment is those who need a smartphone with lower budget for music.