It sounds odd to read but modern LED, OLED televisions has a coating on the surface! Many smartphones have Gorilla glass and their display technology actually different. Without knowledge of how to clean these large screen television really destroyed the screen of many owners by creating scratch (even crack), odd cloudy effect and similar horrible end. It can be impractical to think to repair them for the high cost. Another definite risk is mechanical hit resulting destruction. Here are the methods of cleaning & screen protectors of large-screen televisions. The screen protectors remind blue protectors used for the old B&W CRT televisions! Although sounds funny, screen protectors are reported to be useful.

Do not use any cloth outside good quality microfiber cloth. Some of the manufacturers now including a microfiber cloth with their sets for general cleaning of the frame and screen. Do not spray water directly onto the television screen – water may enter through bezel end at bottom and ruin part of the circuit! Do not spray water either. Just apply a small amount of water on the corner of the microfiber cloth. Do not use cleaning fluids, wax, or chemicals even that you use for cleaning DSLR lens! It is a common mistake to tend towards using DSLR lens cleaner kit. The kit’s blower is useful to dust off. But, the material of these televisions more fragile. Some of the manufacturers suggest up to 50:50 solution of water:vinegar as maximum usable fluid to clean. What chemicals the screen can tolerate that depends on the brand. Try to remain within distilled water. Always turn off the set, let it cool for a few minutes, and then unplug the monitor. Gently wipe the screen after blowing away dust DSLR lens cleaner kit. Wipe the screen as gently as possible. Avoid giving almost minimal pressure. Press it hard really will break.

It is obvious to get scared reading so much precaution. But there are peoples who faced pathetic fate just for not knowing it.

It is very useful. These protectors are transparent like a hard case for older colour smartphones. They snugly fit over the bezel (so there is a gap between the screen and the protector). Usually, there is a couple of velcro buckles to strap on at back. They do not look ugly at all. Protectors are not cheap – may cost $100 to $200 depending on the size of the screen. This will end the story of the difficulty of cleaning the screen. You can use good screen cleaners for cleaning the protectors.

A really good function of the protectors is decreasing some of the light radiations, apart from protecting from accidental collision impact, scratches. Of course they do not give super power to withstand any amount of force.

Next step is arranging a VESA mount. Wall mount technically can hold the television set more securely than stand can do. Do not think of VESA mount before applying the screen protector – it will invite more grease of fingers. If you do the drill work yourself, then, of course, protect the television set from dust & debris by wrapping it. Then use a vacuum cleaner to mop as much dust as possible. I suggest to set the VESA mount with help from a technician and use white cement to jam the screws in the wall holes. Allow sufficient time to set. Next layer of protection is adding a collapsable shutter or rolling shutter (some old televisions used to have it) when not in use – TV off, whole wall off! I have not designed it yet and definitely share that project upon completion. Even a cardboard in front will protect it than having nothing. Sadly various light also a psychological demand. 50″ above sized screen is really big and such big-screen highly prone to damage. There are horrible damage stories all over the internet. Someone’s child used a crayon to draw over the big black screen (it looks like a blackboard, difficult to suppress laughter) – warm water & slow rubbing thankfully fixed it. But crayon’s scratch erased the coating following drawing pattern. Drawing with chalk not created much damage. Drawing with a pencil was suggested to erase using a soft eraser. Stories are sadder when damage made by neighbour’s child or friend of own child. Designing some collapsable shutter in front will avoid many troubles. A lot of DIY technologies has been tried by many poor research workers at home. Rolling shutter, collapsible shutter, window like bifold doors. 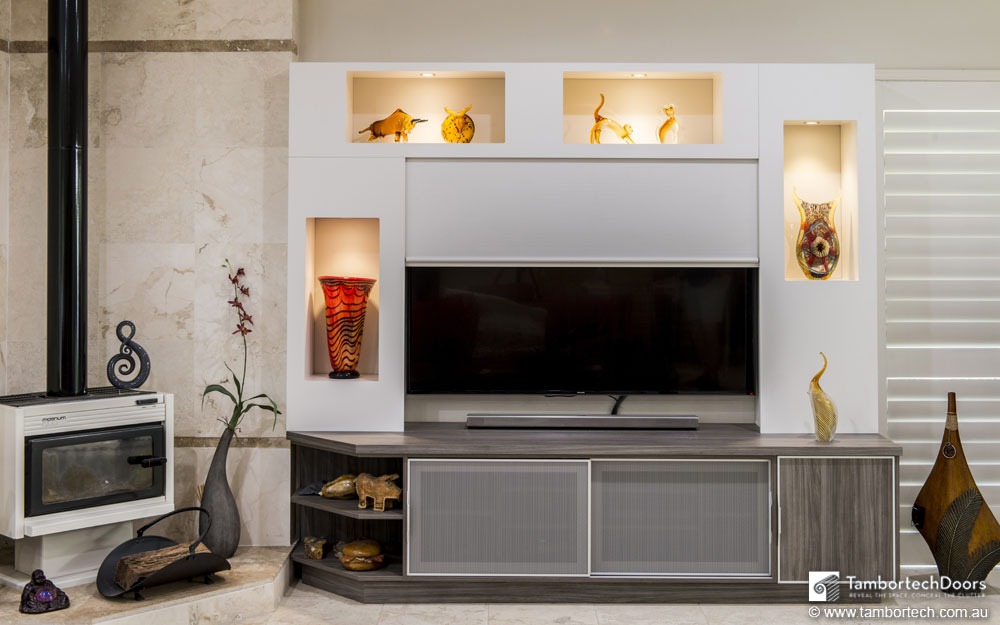 There is motorized roller shade outdoor TV cover. They look ugly (to me).