Advertisement
You are here: Home » What is Soundbar? Which Budget Soundbar is Suitable For 43-55 inch 4K TVs?
Advertisement

These days, soundbar increasingly becoming common. What is Soundbar? A Soundbar is a Type of Horizontal Loudspeaker With Multiple Speakers Inside Placed Below TV Display to Deliver Cinematic Sound Effect. What is the difference of them with traditional audio systems like 2.1, 5.1, 7.1? Real soundbar were primarily designed to deliver just better sound with good bass response to the flat-screen TVs as alterative & better speaker for the televisions.

Soundbar really external speaker for modern television. The old CRT televisions had big box to place larger speakers. Flat-screen televisions has smaller speakers. These days, what are sold in the market often are hybrid of traditional audio systems and original soundbar. Original soundbars which came in the market in 2000s are still sold, often at lower price like $100. They are practically like speakers for computer screens. Some specified companies manufacture the hybrid soundbars, which are enough to deliver bass and surround sound. In easy langugage, they are referred as 5.1 soundbar to denote presence of 5.1 like system with a soundbar. There are soundbars with $1000 price tag which are just soundbar & good to deliver virtual surround effect. With restricted budget, the “hybrid” form is better. 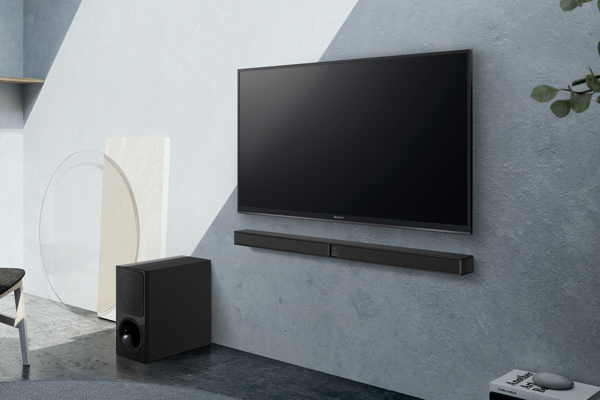 Which Budget Soundbar is Suitable For 43-55 inch 4K TVs?

There many points to check while buying a soundbar system for the usual flat television size from 43 inch to 55 inch, which average room size and usual television models of these days.

Connectivity often not easy as advertised. These days, you need HDMI ARC port on soundbar plus optical coaxial cable input. Other expected inputs are Bluetooth and USB port.

Only one soundbar can be joined with your existing old 5.1 audio system provided that the soundbar has RCA or 3.5mm output port. That sounds cool idea but sadly, at lower cost you’ll get 5.1 soundbar (hybrid).

As we are supportive towards the medium budget hybrid, we expect at least two rear speakers, one center subwoffer unit, in addition to the soundbar.

Some of the soundbar has worst remote, even no remote, some throw odd connectivity message and some has a LED display either at impractical location or too distracting. With limited budget, 5.1 soundbar (hybrid) usually have display on the subwoffer unit. Soundbar should not block remote control of TV!

If the soundbar system is an upgrade to solve your problems to connect modern television with old sound system then you must think about presence of Bluetooth and WiFi to make the system future proof. We do not recommend soundbar which is just dumb.

Technology like Dolby Atmos will deliver you three-dimensional cinematic surround sound like movie theater which exactly what a traditional 5.1 has problem to handle due to physical distance (sound depends on temperature unlike light). HDMI ARC supports Stereo, Dolby Digital, DTS, DTS:X, Dolby Digital Plus and Dolby Atmos. Optical supports Stereo, Dolby Digital, DTS. If your television has no HDMI ARC, only optical then Dolby Atmos not going to directly Help. Also, what chipset your television has that matters. Dolby Atmos often pointed as 5.1.4 (not just 5.1), the last number refers to the number of dedicated drivers which bounces sound to ceiling to create an useful effect.

Conclusion really depends on your existing setup and budget.

The length of a soundbar to match your television has charts. It is probably important factor for a sane look.
Typical 43 inch to 50 inch televisions needs 38-45 inch soundbar. Of course we can point you towards $2000 soundbars, but that will need play on www.lecasinoenligne.io and win! Average people’s budget is within $250.

Sony HT-RT3 5.1 Soundbar (hybrid) is a reasonably priced soundbar (around $220). Of course, it misses Dolby Atmos, WiFi. Samsung HW-MS650 is also reasonably priced soundbar (around $350) and really a “soundbar” for the Samsung televisions. Samsung forgot to supply it by default with their mid range flat TVs! Sadly, it lack deep bass and output ports. Speaker technologies not exactly hugely improved in the last 50 years, although Dolby Atmos is a wanted feature. Cheapest known price to get Dolby Atmos is $550 priced Onkyo SBT-A500 3.1.2. Dolby Atmos sources are limited. Sony HT-NT5 is higher end soundbar which shipped as 2.1 but can be expanded to 5.1 and has too many unwanted features. Not many companies are known to have worldwide customer support. Number of brand actually get limited. Your last option to route digital audio to RCA is using converter which we discussed before.

This Article Has Been Shared 639 Times!

Articles Related to What is Soundbar? Which Budget Soundbar is Suitable For 43-55 inch 4K TVs?