A button press sending a push message and email from ESP32 to Android is most wanted project. It is limited by people’s abillity to develop Android app. I was finding an easy way for the readers. I re-discovered and tested Pushover with Node-RED on IBM Watson IoT platform. Within 15 minutues with minimum clicks I received beutiful push message from IBM Watson IoT platform with ESP32 HTTP POST on button press. This step made a basic prototyping of complex protocols and coding just easy.

It is very easy to integrate Pushover with Node-RED. I made it just easy. This step also makes it possible to run the whole system on own server (instead of IBM) like on a cloud server or Raspberry Pi, where only Pushoever is the service not in 100% own control. IBM actually use open source things. For making the thing propietary free, I routed Pushover via Node-RED for push message plus sending email. In this formula, the complexity of project can be increased to near industrial level.

Pushover charges $5 once for the Android app (after 7 days trial). They have no charge for any push message. For 2 Android devices, you have to pay $10. Not bad as you can avoid Android app development. It is not easy to keep app updated.

First sign-up for Pushover. Next on Node-RED, go to Settings (from top right menu), then go to Pallete, click install tab. Find Pushover Node by typing and install by clicking it. You will have Pushover node on on Node-RED. Rest is dragging the Pushover node, connecting it, double clicking the Pushover node, filling the auth details from Pushover account and at end deploying it. This is the current connection of Node-RED (reading the previous steps on separate article will help you) : 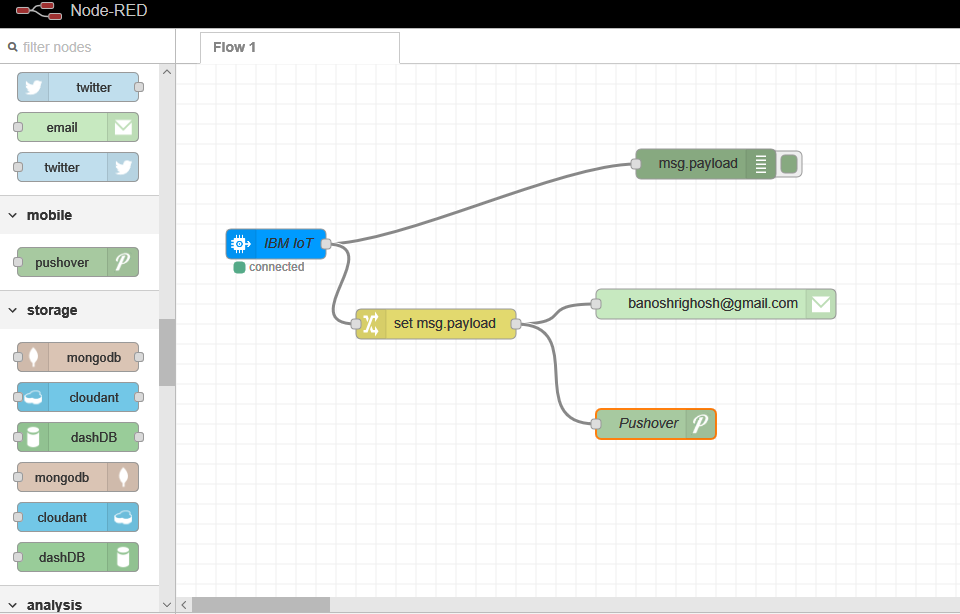 With the above connection, we can hit many other ESP32 with some modification to make performing actions on geographically far away places.

This project with some improvement like adding a motion sensor better to be a Github project as addition to conventional doorbell. Question will be where is a camera? Camera will also get added. Within $20 budget, you will get a project with ESP32 which will send push message and email either by push of doorbell button or by movement closer to it. In addition, it will capture image and upload to server. Commercial devices at cheapest level will not cost closer to $20 plus you can not have control on any part.

This Article Has Been Shared 548 Times!