Advertisement
You are here: Home » How to Install Apache Druid (Single Server)
Advertisement

Apache Druid is a column oriented, analytics database which can be used to build a data warehouse. Druid has APIs (via HTTP and JDBC) for loading, managing, and querying data and the user can also interact with Druid via the console. A mere 4GB RAM of an instance or computer is sufficient to test-run nano-quickstart configuration of Druid, and 16GB RAM instance can run it at production. Druid can be used for clickstreams, view streams, and activity streams, for measuring user engagement, tracking A/B test data, understanding usage patterns, compute impressions, clicks, eCPM, and key conversion metrics. Other use cases of Druid includes business intelligence (OLAPOLAP), Internet of Things. 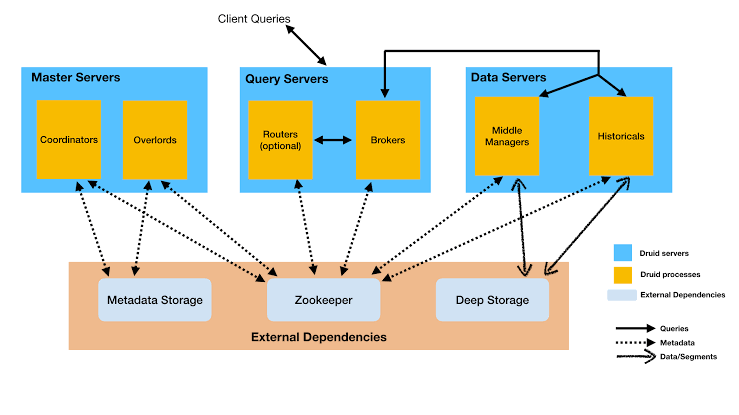 Druid is intended to run as a cluster of nodes to support a fault-tolerant architecture. The cluster will include external dependencies for Apache ZooKeeper (coordination), MySQL or PostgreSQL (metadata storage), and HDFS, or Amazon S3 for deep storage. Using Ambari, you configure Apache Druid (incubating) by setting parameters in a graphical user interface. Druid can be downloaded (and details read) from :

We have to extract and navigate to the main directory :

The directories contain the below :

Apache Zookeeper is a dependency of Apache Druid :

The contents of the Zookeeper to be located at zk under the apache-druid-0.16.0-incubating package root. It is too easy to start Apache Druid :

Druid UI runs on http://localhost:8888/. It is important to read the tutorials on Druid to correctly configure depending on your need :

Start a CLI session: mysql -u root -p. Inside the session issue the following commands :

This is the minimum common settings for MySQL :

That ends this guide.

Articles Related to How to Install Apache Druid (Single Server)