Advertisement
You are here: Home » Reusing the Technologies of Latest Vaping Devices
Advertisement

e-cigarette, also called vaping device, is an electronic inhaler system designed at its origin to simulate tobacco use, without actually burning tobacco, unlike the traditional cigarettes. In basic form, these devices use a battery and a coil as resistance to heat and vaporize a liquid solution (vaping liquid or e-Liquid) solution containing nicotine and other chemicals such as propylene glycol, glycerine, and flavorings. At the beginning of the present century, e-cigarettes were popular as an alternative to the traditional cigarette.

Their design used to imitate cigarettes, cigars or pipes. Today there are varied designs; some of the models turn on automatically when inhaled, and others need pushing a button.
As the basic idea involves battery, coil, sensors (acoustic, pressure, touch, capacitive, optical, Hall Effect or electromagnetic field) and a push-button; slowly the advanced users with knowledge of DIY electronics started to develop own mods with microcontrollers such as Arduino, ESP32, micro-pump, actuators, display and so on. Some of them even started commercial production in micro-scale. The goal of this article is not to go into the debate whether e-cigarettes offer benefit as an alternative to traditional cigarette or same harmful or worse harmful than conventional cigarettes. 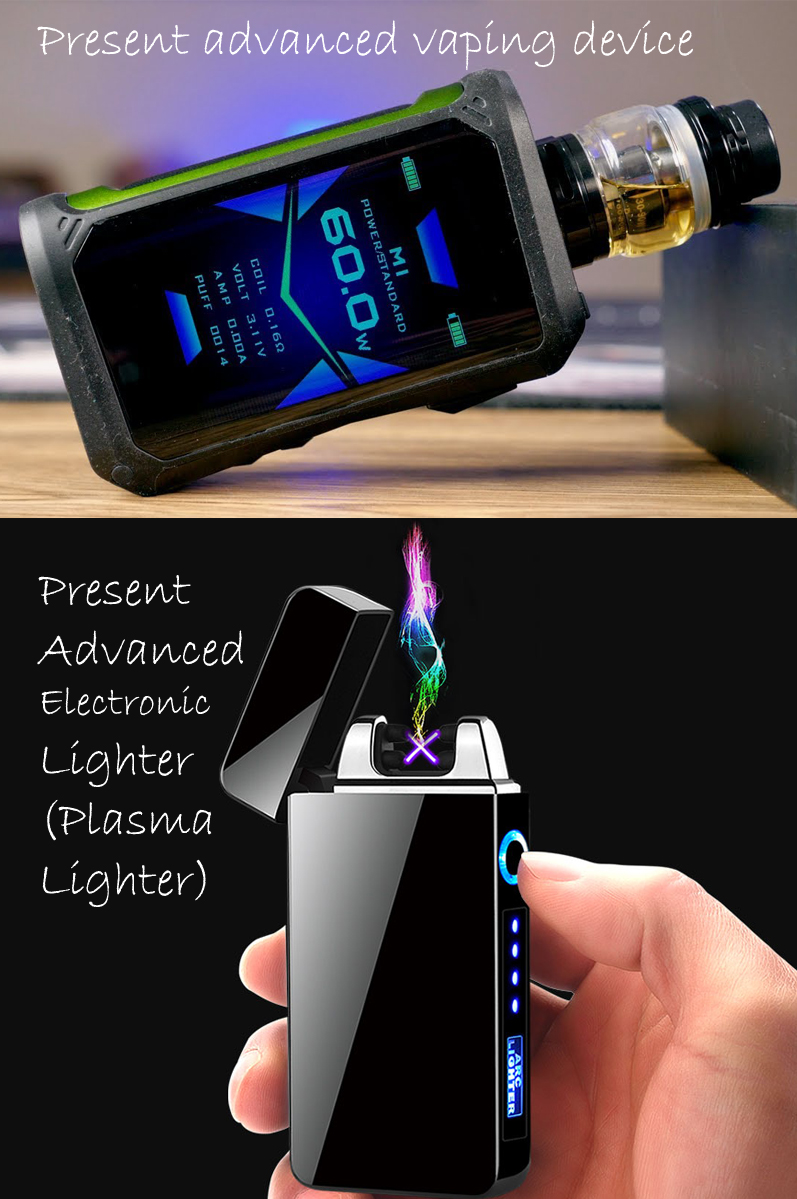 Construction of an e-cigarette

It is generally agreed that still date, there are four generations of e-cigarettes. The early devices which looked like a traditional cigarette are counted as of the first generation e-cigarette. The composition of an e-cigarette consists of two distinct elements:

The atomizer: It is a coil, a resistance which is placed to heat-up the liquid. They have a resistance of near 3 Ohm.
The wick or tube: Not always it is present. The wick or tube draws liquid onto the atomizer.
The mod: It is the tank with a battery and an optional circuit. This unit supplies the necessary current and fluid to heat the resistance.
Switch or sensor: Which initiates the electrical flow to the atomizer coil to start heating up. In the advanced models, there can be starting a microcontroller and/or micro-pump.
Integrated power unit: Usually a rechargeable lithium-ion battery
Charging port: Usually, some charging system is present along with a charging port to attach with a laptop or household electric supply to charge the battery unit.
Mouthpiece: Used to inhale.

There are models with variable power and variable voltage to adjust the power applied to the atomizer coil changing the character of vapor output. The 4th e-cigarettes contain very little and can deliver a larger puff.

The Possibility of Re-Using Technology in Other Devices

As for purely DIY electronics, even in the official Arduino forum, threads are discussing the circuit design and code for ESP32 with Arduino IDE to build a basic circuit with the heating element. The required code to build the basic is easy:

The participants reached a satisfactory level after following recommendations. In the 2010s, many peoples used to hand-build the complete circuit involving micro-pump and display. Today, there are ready-to-use advanced devices with a rebuildable atomizer. Browsing any standard online vape shop of today will reveal many ready-to-use “starter kits” with engineering excellence.

GeekVape Aegis X, for example easily won the appreciation from the experienced reviewers. Its durable design with a 2.4 inch OLED display is engineering excellence. After watching these matured, well-tested devices (which are cheaper out of mass production) with details of each required parameter on their display, it can be concluded that these technologies can be easily applied in many other devices of today. A lighter, a cooking gas cylinder or a fountain pen at present is not so advanced.

From a development point of view, we can say that the latest vaping mods not only satisfying their consumers from an electronics development point of view but also, they are opening up the chance of progress of many consumer-grade products. Their progress can be adapted for use on general-purpose household products such as a cooking gas cylinder or a cigarette lighter.

The Government and courts, unfortunately, in some countries still choke the tax-payers imposing their choices. It is not possible for many of the developers in the restricted countries to study the latest devices. Yet, developing an electronic lighter with OLED display and automatic functions will remain our dream.

Articles Related to Reusing the Technologies of Latest Vaping Devices