Vehicles with emergency braking assistants usually have sensors to determine distances, acceleration, steering angle, steering wheel angle and pedal positions. From the measured values of these sensors, the on-board computer calculates whether there are indications of a hazardous situation and/or a critical driving condition. The data of some sensors are also used for other purposes. For example, ABS and driving dynamics control (also called ESP or ESC) use the data of the sensors on the wheels. Many emergency braking assistants, for example, warn the driver, not enough distance from the vehicle in front before automatically reducing and braking the fuel supply. These systems are designated differently depending on the vehicle manufacturer or automotive supplier and bear a proprietary name.

In the emergency braking assistant, sensors monitor the environment and first warn the driver of critical situations to allow them to react. If the system detects that a collision is imminent, it calculates how hard the vehicle needs to be braked to avoid the collision. When the driver brakes, the system increases the braking pressure by the required level.

Many newer systems respond not only to other vehicles but also to other road users such as pedestrians or cyclists. This prevents or mitigates head-on collisions and significantly increases safety for pedestrians and cyclists. Often a better camera is combined with sensors for the pedal positions. The assistant is thus able to better assess the driver’s behaviour according to the situation and to assist the driver in coping with difficult situations. If, for example, the emergency braking assistant detects a critical situation for emergency braking due to a rapidly released accelerator pedal and powerfully operated brake pedal, the full braking pressure, which is necessary for maximum deceleration, is immediately set up. Besides, further measures for the protection of occupants can be taken, depending on the system. 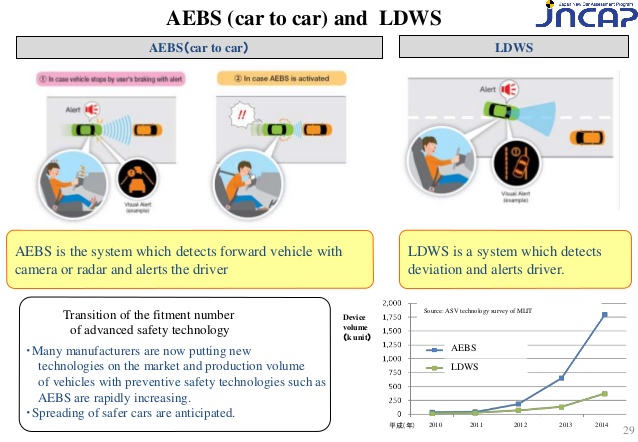 Here, there are additional and more accurate sensors are usually available compared to the emergency braking assistant. For example, for safe detection of the distance to the frontman and its speed, a radar sensor is often installed, which is not required for the simpler systems. The validity of the forecasts allows the initiative to be reversed: it is not the driver who actively triggers the system as it does with the emergency braking assistant, but the driver can oversteer the system. If the driver does not take any action, the system becomes active on its own and brakes the vehicle.

When detecting a critical situation, the driver is visually and acoustically warned in the first stage. If the driver does not react to this, the system first initiates a significant speed reduction (partial braking). If the calculated distance becomes too small and the driver has still not reacted, full braking is triggered to avoid the collision with an obstacle or at least to minimize the force of the impact. If the system detects the obstacle or vehicle in front of it late, the system can also immediately initiate partial braking, if necessary full braking, without warning the driver. These measures are usually accompanied by further measures for the protection of occupants.

An occupant protection system detects potentially dangerous situations such as slingshots, heavy oversteering or understeering, or too little distance. It reacts by reversibly tensioning the mechanical belt tensioners before the possible emergency, placing seats in an upright optimal position and closing the window and sliding roof. Depending on the equipment of the vehicle, foldable headrests can also be installed or massage systems can be used in seats for better grip.