Research in AI and cognitive science try to investigate various learning algorithms. Blackjack is a wonderful game in the sense it doesn’t fall directly into chance and the players who take the time to research and learn the skills of the game have a significant advantage over those who don’t. Researching strategies can be tough as there is certainly a lot of information available out there. Various researches have investigated the cognitive models of blackjack playing as they consider it a useful use-case for developing theories of human learning.

Curiously, there is existence of some well-known and optimal strategies for blackjack. However, studies have found that casino players play quite diﬀerently from those strategies. Hence the researchers worked on computational models in an attempt to explain such result by using the cognitive architecture such as CHREST. Before we enter that topic, we need to explain some of the advanced Blackjack strategies.

The first thing you should do is learn to make the distinction between advanced Blackjack strategies and basic ones. As the name states, basic strategies are simple and are used by the players who are new to the game. The differences between basic and advanced are things such as the basic strategy being incredibly easy to memorise as it details information which can be easily learnt and they benefit from their use of a chart which helps players to learn the techniques correctly. You’ll find that advanced strategies aren’t so easy to learn, they need to be studied properly to anticipate any changes in the game. Learning basic strategies can certainly be helpful for players but taking the time to learn about some advanced Blackjack games strategies could give the edge to the players. Advanced strategies account for variations in play, something which does not. Basic also omits the use of insurance entirely whilst advanced takes into account the best situations that players could take it out.

This is an incredibly common strategy that first came from France. It believes that when a player loses, they can recoup their loss by doubling their bet on the next hand. Theoretically, this is a solid strategy which should help prevent players from losing money but in practice, it won’t always work, particularly if a player is in the middle of a losing streak. This is much better served to players who have more money to spend and don’t mind losing rather than casual gamblers.

This method is for players who are more patient and don’t mind waiting instead of those who seek instant success. It’s called Oscar’s grind for a reason, it takes time! Players should only place the minimum bet requirement of a game, only to progressive up their bet as they slowly increase their winnings. This is a very conservative method and will take a great deal of time to implement properly, however, those that do take the time have been rewarded.

Modeling the Role of Learning

We have explained two systems above so that the readers can understand what kind of “strategies” we are talking about. Let’s come back to our topic. The performance of blackjack players in the casino is never optimal playing with the strategies we have mentioned. So the question arises, what strategies people adopt when playing blackjack, and how they are related to learning. While researching this, researchers proposed a cognitive model named CHREST. Also, a traditional AI algorithm existed at that time named SARSA. CHREST deploys own system that implements emotional memory. Reinforcement learning in decision-making tasks has been intensively studied through various researches.

CHREST stands for Chunk Hierarchy and REtrieval STructures. The chunking hypothesis includes statements about the extent of short-term memory span, which according to the researchers is 7±2 chunks and is genetically determined. The specific content of individual chunks is considered insignificant for short-term retention. As a result, the memory span – regardless of irritant materials such as binary numbers, decimal numbers, letters or words – is about five to nine chunks, while the information content (bits) of these materials can be very different. CHREST is a symbolic cognitive architecture based on the concepts of short-term memories and chunking. Learning is modelled as the development of a network of connected chunks.

CHREST can be run in Java to enabling us testing of cognitive models.

CHREST models can be developed using languages supported by the JVM – using Java, Lisp, Python and Ruby are common languages to use. 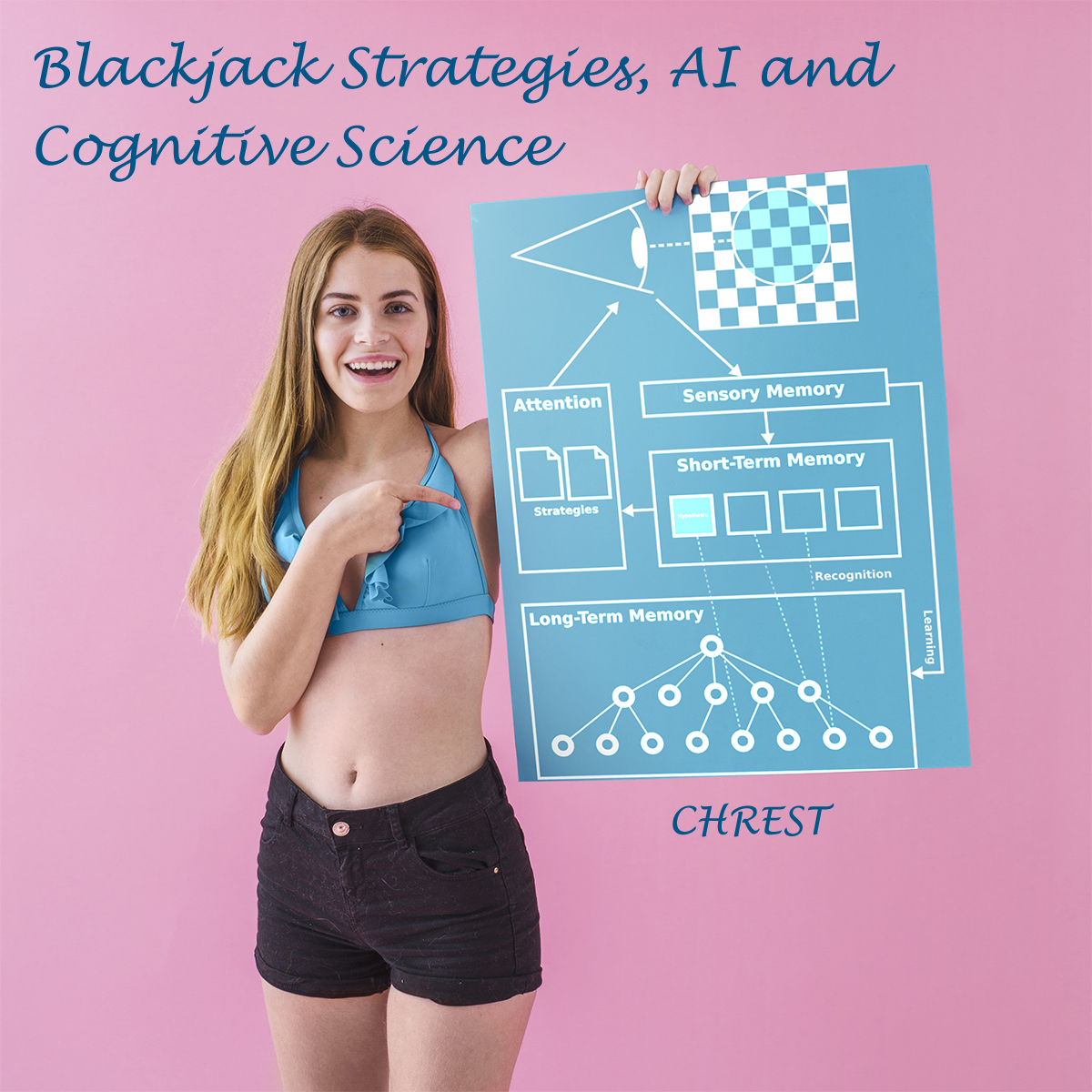 What CHREST Teaches Us?

In reality, there is no winning strategy for Blackjack — playing long enough will lose money. Advanced Blackjack strategies may seem a little intimidating at first, they are much more complicated and require more time and effort than basic strategies. However, they are much more likely to prove effective to the players who take the time to learn them effectively than those who don’t bother.

However, we can use the cognitive and AI models developed from the observations of BlackJack.

The processes behind discovering patterns for theories of artificial intelligence, pattern recognition, categorising and interpreting are an important element for problem-solving. CHREST models begin by training the model with data, and from this, the associated long-term memories are constructed. CHREST has been successful in providing general-purpose mechanisms applicable to multiple models. CHREST is a suitable architecture for studying tasks involving categorisation and understanding based on prior expertise.