Digital Rights Management is a type of copy protection in which the use (and distribution) of digital media is not prevented, but the use (and distribution) of digital media is to be controlled. Especially for digitally available film and sound recordings, but also for software, electronic documents or electronic books, digital usage management is used. In principle, it enables providers who use such DRM systems to have new billing options, for example, to be remunerated by means of licenses and authorizations to use data instead of the data itself. For the end user, this means a limitation.

Digitized Content of any kind can be easily reproduced and, in principle, redistributed without restriction. However, this often uncontrolled flow of information inevitably leads to conflicts between users and authors or rights holders of digital content, as uncontrolled use violates copyright and usually has a negative impact on the underlying business model. From the point of view of authors and exploiters, it is therefore essential to define barriers that regulate access to protected intellectual property and can also restrict it after disclosure. A DRM system (DRMS) is intended to help by enabling the use of data only within the framework (license) defined by the respective rights holders.

However, mechanisms of digital rights management are generally highly controversial. Proponents see in systems of digital rights management mainly the opening of new business models with more needs-based billing (pay-per-view) as well as the potential elimination of lump-sum levies on blank media such as CD blanks and the associated relief of consumers. In addition, DRMS (DRM systems) can also be used to protect critical data such as company internals (Enterprise Rights Management). Critics warn above all of privacy issues and possible limitations on usability and archiving, as well as that it will be impossible to enforce the limits of copyright. It is considered problematic that the use of this system restricts the interoperability of devices and digital content.

From the point of view of many representatives of the music industry and exploiters, the arbitrary copyability of digital content first became a serious problem in the mid-1990s, when CD burners became affordable for end users and personal computers powerful enough to handle music compressed in MP3format. At the end of the 1990s, the so-called Internet file sharing sites also became increasingly popular, as Internet users can in principle copy files from the hard disk of other users free of charge. Often these are copyrighted music, films or software. According to the media industry, this led to considerable declines in sales. Due to the unlimited duplication possibilities, media companies did not use the new digital distribution channels made possible by the Internet for a long time. However, the growing importance of the Internet increasingly forced companies to act, which was reflected in the development of DRM systems (more precisely: Multimedia Rights Management). It was not until 2003 that a distribution channel with integrated digital rights management gained commercial importance with the opening of the iTunes Music Store. 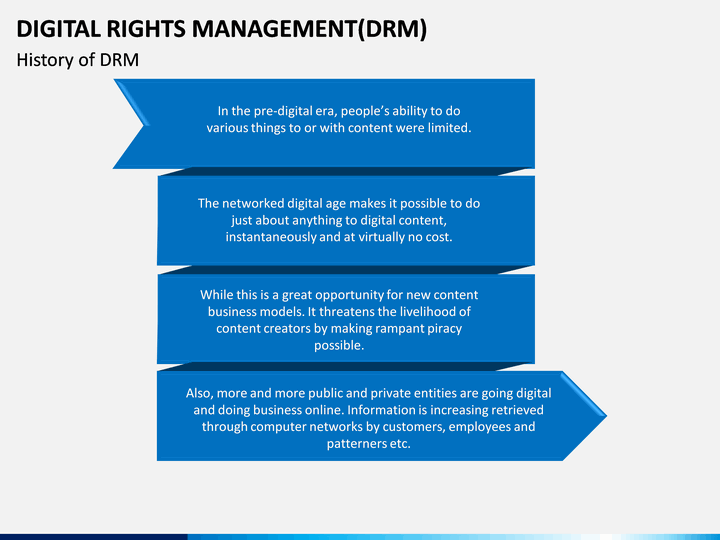 Meanwhile, DRMS are also used in many other areas, for example in companies, to protect documents. The multitude of definitions can be divided into far more comprehensive and narrow definitions. DRMS refers to technical security measures that allow the rights holders of information goods to limit the way they use their property and thus enforce compliance with a previously made user agreement. DRMS generally includes technologies that use digital watermarks. These offer only limited possibilities for usage control (for example, use of fragile watermarks, which prevent the display or playback of copied content in special playback devices).

Electronic protection mechanisms for digital information are called DRMS too. They enable the exploitation of digital content beyond a pure lump-sum remuneration and also allow individual licensing/billing according to frequency, duration or scope of use. On the one hand, this makes unlimited use restricted, on the other hand, on-demand business models are made possible that were previously difficult to realize.

Tagged With what is rights management

This Article Has Been Shared 978 Times!

Articles Related to What is Digital Rights Management (DRM)