Advertisement
You are here: Home » Windows 8 to showcase desktop as a service
Advertisement

Here™s a slide that shows how Microsoft is thinking about the next-gen virtual desktop: 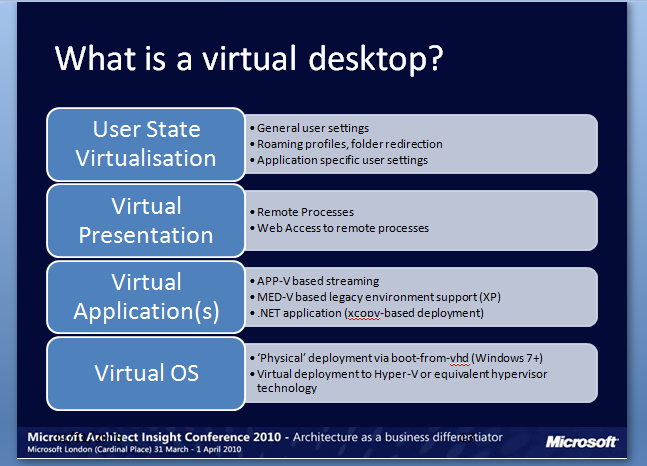 In the brave, new DaaS world, œthe desktop should not be associated with the device. (T)he desktop can be thought of as a portal which surfaces the users apps, data, user state and authorisation and access, according to the slides.

DaaS means applications and data are centrally managed, as are the deployment of these apps and data. Apps and data are œtreated as cached entities and synchronized with an appstore and œuser state store, the slide deck explained. (Aha! Another mention of the infamous Windows 8 app store concept.) The operating system also is cached and synched with the appstore in this new model. Hardware failure becomes a non-issue (at least in theory) for users, and more reliable maintenance of applications and the operating system become possible, according to the slides.

More and more of the desktop will be virtualizable, as this slide (with the Windows Next mention) shows: 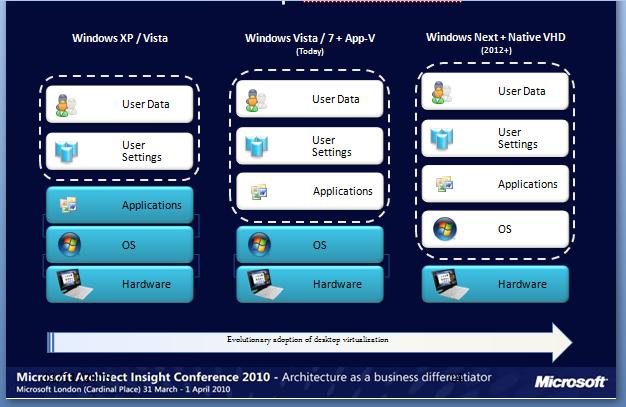 With Windows 7, Microsoft is able to provide virtualization of a user™s data, settings and applications (by using App-V). With œWindows Next and beyond, Microsoft will be adding the ability to virtualize the operating system, as well, by providing native virtual hard disk (VHD) capabilities in/with Win 8, according to the slide.

As I noted when Windows 8 slides leaked earlier this year, any/all of these concepts and plans could be shelved by the time Microsoft starts delivering the first public test builds of Windows 8 (some time in 2011). But it™s still interesting to see the thought process behind the next Windows release ” and how/if it eventually will map to reality.

I™m wondering what the DaaS concept will mean not just to businesses, but also consumers. Would Microsoft be the one providing OS virtualization, via its own centralized datacenters ” the way it is currently providing hosted applications via BPOS/Office 365?

Other thoughts/interpretations of what Microsoft might be planning on the virtualization/cloud front with Windows 8?

This Article Has Been Shared 449 Times!

Articles Related to Windows 8 to showcase desktop as a service