Capacitive Touch Screen works on the principle of Capacitive sensors which work based on the change in the capacity of a single capacitor or an entire condenser system. Capacitive Screen can be effected in various ways, which are mostly done at hardware level. 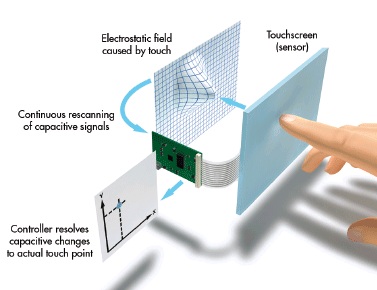 By the capacitive pressure sensor if present on a Capacitive Touch Screen, the capacitance changed is evaluated as a result of bending of a membrane and the resulting change in plate separation as a sensor effect. The membrane is designed here as a capacitor plate. The capacitance changes are fairly small, so that a suitable processing electronics must be integrated with high sensitivity.