OpenNebula is datacenter centric thought taking the fact that Cloud Computing is the next step in the evolution of the data center.  Among the contributers of OpenNebula, there are IBM, Akamai like giants, Dell, CERN as Users. Striking feature that OpenNebula has is that, there are Projects, which uses and provides services in the cloud using OpenNebula as the cloud engine.

OpenNebula provides free Demo account for the future users as well. OpenNebula provides the choice from several cloud interfaces including Amazon EC2 Query, vCloud and has hypervisor solutions from Xen, KVM, VMware. They have a separate marketplace basically featuring the softwares like Server Operating Systems including Ubuntu, ttylinux, Debian, CentOS, Open SUSE as well as their own Sandbox, Virtual Router etc.

Developers have said to be succeeded in several projects of OpenNebula as the version 3.6 has more functionality. Many features were actually added in the previous version 3.4 and there are some new features such as the OpenNebula marketplace. 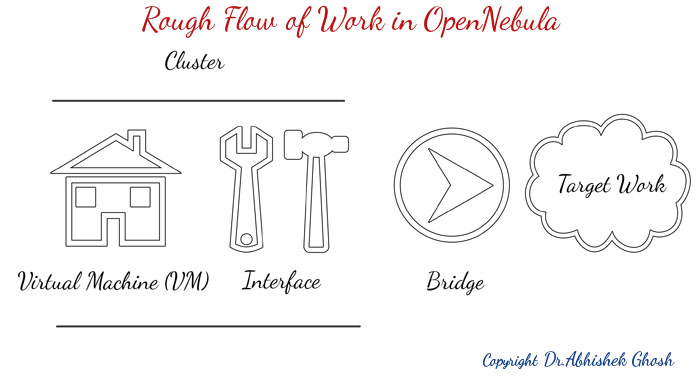 OpenNebula supports LVM, so that snapshotting feature may be employed. In this case the system assumes that the devices are also available on the node. This can be done manually by creating the device directly in the corresponding node or by using more sophisticated techniques.
Note that OpenNebula implements large amount of functionality, such as managing users, managing user roles, management of the nodes, image management, management of virtual machines, managing clusters, virtual network management, context management to customize the machines virtual startup, management planner deployment  etc. However, one of the most important drawback of OpenNebula from the viewpoint of user lies in the use of templates to start the virtual machines. These are just like text files, which makes management difficult for a user to use several virtual machines, since this could wrongly delete the template files accidentally which would mean the use have to create new templates to start virtual machines on OpenNebula, with the consequent loss of time. Therefore, OpenNebula not have an integrated repository that permits the management of the workforce, despite the availability of repository
virtual machine images and database partner, such as MySQL.

This Article Has Been Shared 713 Times!