The basic thing is actually neither about Rackspace Cloud Files nor Flowplayer. It is about WordPress. The user Mai faced the problem, probably due to one big thing that is never elaborated said about WordPress writing pane. For example, if you look at this screenshot, you will see two toggle buttons – Visual and HTML : 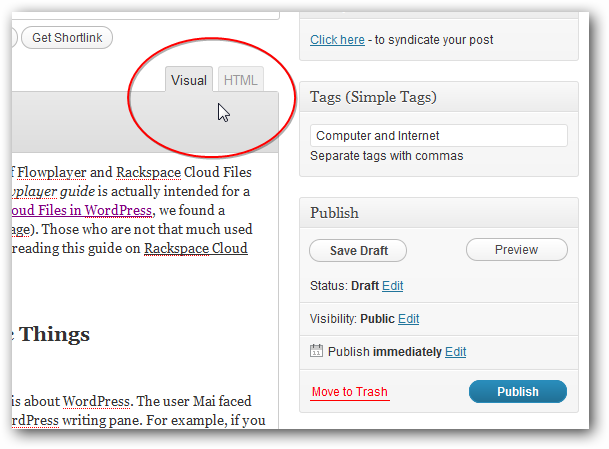 If you toggle HTML and Visual mode many times, the formatting get lost. This is actually TinyMCE, not a core own developed part of WordPress. For inserting any custom complex HTML, Javascript codes, always paste in HTML mode in last step, save the draft and publish it. Never revert to Visual mode even in idle state after publishing. The codes can break if you revert back to Visual.

Another thing is that, in Writing Settings of WordPress (/wp-admin/options-writing.php), tick that option saying “WordPress should correct invalidly nested XHTML automatically” and uncheck the option saying “Convert emoticons like :-) and :-P to graphics on display”.

Rackspace Cloud Files is not mere Content Delivery Network, it actually has quite large number of undocumented usages. We wrote some by testing after following Akamai’s Guide. Unfortunately, sometimes, a bit change of trick is needed for Rackspace Cloud Files as Rackspace obviously use a custom featured plan of Akamai. The basic rule about about HTTP, HTTPS and Streaming URLs are :

HTTP URL : URL of choice unless it is of Streaming Media or you need HTTPS URL of CDN for your website which is using HTTPS itself. We use in that case to avoid mixed content error, otherwise HTTPS is slower than HTTP. Using https URL of Rackspace Cloud Files for WordPress guide will through some more spotlight. It supports delivery of all things uploaded on Cloud Files. You can take, this is default.

HTTPS URL :  Usage is explained above. However,  HTTPS URL might not deliver all kind of static contents.

All types of plugin reference can be found here :

Except non hosted, almost all are supported by Rackspace Cloud Files. We have not tested HDDN, HDDN is supported by Akamai, but unless we test, we can not give warranty about Rackspace Cloud Files for HDDN. We have the highest number of Cloud Computing guide in English Language on this Earth of Internet as non product selling website, it will be a misleading comment without testing it, HDDN also has Slow Motion control like very advanced feature :

Rackspace Cloud Files and Flowplayer : iPad and other iDevices

You can actually use native iOS support by Rackspace Cloud Files and Flowplayer in two ways :

First is without using HDDN support of backend :

We have not tested with HDDN support at the time of writing. HDDN support is not an absolute terminology, one feature might be supported another might not be by Rackspace Cloud Files. Probably there is some Service Level Agreement with Akamai and Rackspace, that resulted very less documentation of this aspect. These are highest level of technology, very difficult to say a single word just on prediction. Akamai is used by almost all the giants from IBM to Microsoft. It is obvious that, SLA will prevent all the officially publishing all the usages of Akamai’s optimized system. Rackspace Cloud Files costs a fraction, you can not expect all the hidden features in documentation. Most importantly, with WordPress, it is technically difficult to use device OS specific delivery. You have to use Mobile user detection and use WordPress conditional elements to display rightly. Which is probably difficult than using the first method.