Advertisement
You are here: Home » Robotics With Intel Based Processor and Robot Operating System
Advertisement

Robotics With Intel Based Processor and Robot Operating System : The Basics

Robotics With Intel Based Processor has the biggest advantage that, older used processors and motherboards are available at very cheap cost from the consumer market. But this flexibility is diminished by a big factor – Robotics With Intel Based Processor will need extensive supply of power, which points to carry out the real project as a big instrument. But this burden is actually not taken in to account as the usage of such robotic unit is either movable by itself or has stationary base, like an Robotic Surgical Unit. As the motherboard is standard and has all the needed standard components, it can act either as master or slave. With virtualization software, usually master and slave is divided at software level to make the whole unit smaller. Whether there would be multiple boards or single board with virtualization, totally depends on the usage pattern. You can actually think – an attached printer is controlled by the computer with physically touching the printer unit itself.

As the flexibility increases with a standard Intel Based Processor, most Languages used either proprietary or less used. This actually inhibits the universal usage or porting of one project to another. As the pro grade robotics appliance manufacturers are actually has not opened the business with a Free Software Foundation based ideation, rather to make them have more Vendor Lock-in, it is quite impossible to use one already developed function to another field.

The importance of Robot Operating System (ROI) and Robot Intelligence Kernel (RIK) is, they breaks this barrier of development. The official websites can be navigated respectively from : 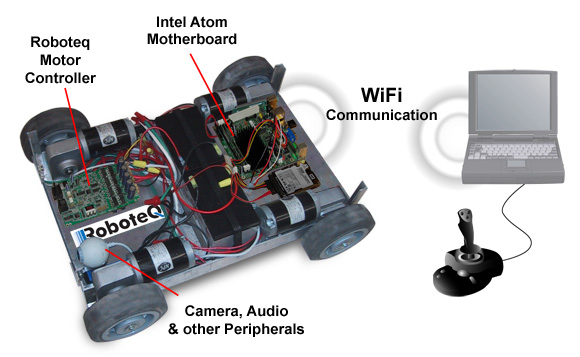 For practical purpose Lisp is an universally used programming language, where we need to employ multiple sets of fuzzy logic and AI.

A very basic example of Robotics With Intel Based Processor can be just the exact application which we used in Arduino Robot’s article linked at the beginning of this article – a WiFi controlled Robot with Intel Atom Processor :

As you can see, the intention of giving everything free of cost is actually to sell their hardwares but, it is a good example, how actually in real the working commercial robotic appliances are manufactured.

This Article Has Been Shared 693 Times!