We would not repeat the way to setup the command line for using Twitter From Command Line Interface again; please setup the needed things properly. Otherwise obviously no trick will work. Basically using Twitter from Command Line interface is technically easier than Facebook. We actually have done it before in other way : Get your Twitter™s tweet as RSS feed and JSON™s url plus widget codes. Servers obviously parse the things as binary and that means as command lines. The situation in case of end user is different as we are not among the authorized chain from CLI. That is why we need an Auth code or API to make sure that we are not automated bots. 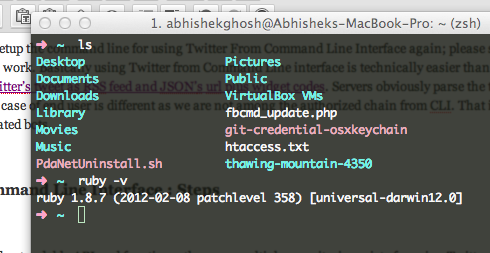 Clone the git and run gem install t command. That Github page is enough easy guide to use the first one for using Twitter from Command Line Interface. The second one will not run if you do not make an installer file. The command written there :

Do not use sudo for zsh setup (like we done in the linked article’s linked guide; sounds complex sentence…) on Mac with iTerm2. You have to basically install libssl and ncurses. ncurses has Apple’s own man page :

If you find the second one pathetic, you can use the first one. The reason we mentioned both due to the reason, some might not love using Ruby Gem. It sounds odd, but we got such comments before !