Reader must have minimum idea on Application Layer, Network Protocol, Abstraction Layer etc. SMB or Server Message Block protocol is a protocol for sharing of resources like files. In the old Windows NT 4, it was called CIFS (Common Internet File System). In Vista and OS X 10.8 onwards it is called SMB 2.0.

SMB works through a structure of client/server model, the client will send specific requests and the file server will respond. The protocol is optimized for use in a local network, but it can also be used on the Internet (most simple attacks Windows have for this reason, benefiting in the presence of the Server service launched by default). The SMB server can provide access to network clients to file systems , but also other resources such as printers. The client can have its own disk which will not be shared and can simultaneously access the shared disks and printers from the server. Shared resources are accessed from an address using the UNC convention :

SMB was originally designed to run over a implementations NetBEUI and is also called NBT. Developments of the protocol were made because it was not routable (needed for interconnection on network with another). It has been encapsulated later. SMB 2.1, introduced with Windows 7 and Server 2008 R2, introduced minor performance enhancements with a new opportunistic locking mechanism. SMB 3.0 (previously named SMB 2.2) was introduced with Windows 8 and Windows Server 2012. It brought several significant changes, such as the SMB Direct Protocol (SMB over RDMA) and SMB Multichannel (multiple connections per SMB session), those are intended to add functionality and improve SMB2 performance, notably in virtualized data centers. The design of Server Message Block version 2 (SMB2) aims to mitigate several performance-limitation by coalescing SMB signals into single packets. 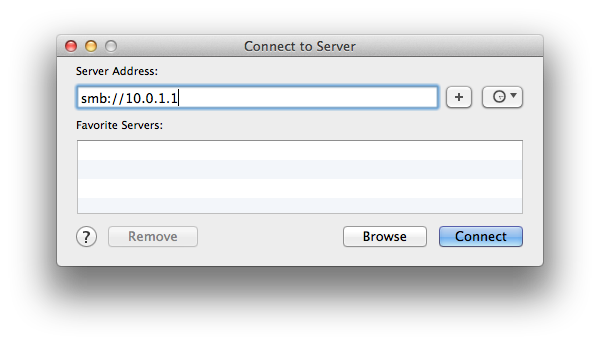 SMB is the default file sharing protocol for OS X Mavericks and Microsoft Windows. This protocol also works with many other operating systems. Detailed Knowledge-base is here :

The official guide is enough nicely written for basic operation and we are not repeating the same methods.