Advertisement
You are here: Home » Opportunities and Risks of Web 2.0 Geolocation
Advertisement

Web 2.0 and the closely related social networks are currently on everyone’s lips. However, there are privacy advocates who warn about the problems with the social networks. After the many data privacy breaches in 2008 and 2009, for which data which more or less accidentally fall into the wrong hands, ended up with various tangible data scandals in which data were systematically and deliberately procured and sold, many people are much more sensitive to handling become their data. An average user also needs to pay attention towards how the companies deal the data.

The problems were not exclusive to the social networks. It is also of concern of any Internet user or telecommunication subscriber and finally of the mass media who widely echoed forth, so that a wide audience get attentive. Many had/has their problems with the Privacy Policy. The data breach, however, has remained the same even after the emergence of the mass media’s focus. Recent data scandals brought the social networks out, led by the industry leader, Facebook. However, this may just be due to also a biasing factor for larger extent of their success, Facebook therefore very strongly brought into focus. The home country of facebook, is USA (United States of America), but then Facebook founder Mark Zuckerberg once said he is unable to find appropriate privacy. This comment was before PRISM incidences. So finally the Europeans noticed in some January that at Facebook not everything is quite as it should be like. However, Richard M. Stallman said these points many a times.

This subheader highlights, where from the term Web 2.0, which includes the Web 2.0 and its development. It shows how important to check, how it now occupies position in the society, what influence it has on society, the society and what participation in the Web 2.0. The launch of the Web 2.0 was first organized by the publisher Tim O’Reilly in October 2004. The addition of 2.0 is dependent on the version numbers of software releases. The jump to a new version number is connected with the basic functional changes or additions and should be transferred to the Web. After the bursting of the New Economy bubble, the remaining Internet companies were trying to reorient themselves. That business encircled companies like Ebay, Amazon and Google.

The term Web 2.0 circulated following the conference between the participants. Not only as an essay, also from O’Reilly a book was published about a year later in 2005, which explains some basic principles and assumptions that helped them to break through. The term migrated from the specialized group of Internet-savvy developers, consultants and entrepreneurs in the broader social discourse. Web 2.0 has often been positively evaluated. “living web”,”participatory web”, “Hypernet” etc. are used to endorse the system. The new network was not justified by the conference, but the conference defined new developments, such as Facebook, which was founded in February 2004 and YouTube in 2005. The ideas behind it are certainly originated earlier. Also covered newer creations such as twitter as well included as veterans from the “Web 1.0” such as blogger and Wikipedia. This development is now continuing with the mobile broadband Internet access. Rates are always cheaper, as well as the equipment. Mobile phones are now small computer with a variety of functions. The fusion of mobile phone, PDA (personal digital assistant) has been completed for a long time to so-called smartphones. The mandatory built-in camera is here to stay. They can, thanks to powerful CCDs (Charge Coupled Device) replace an additional camera. Also, they are now shipped with GPS receivers (Global Positioning System) and were thus extended to navigation device function. The GPS receiver is to an important precondition for a new form of Web 2.0, the geolocation. Latest Operating System from Apple Inc. included the Map function like Smartphones. About these platforms teens are accordingly be reached quickly and in large numbers. Meanwhile, there is a trend to become “Rich and famous”.

The geo-localization, i.e. the determination of the user’s location, is not a new technology, but is the result of continuous improvement. Large companies, earlier had their websites positioned internationally and locally differentiated. However, these companies do not necessarily had local offices abroad, yet possibly customers were there. The user could only select from languages ??those are offered by the website. That changed early by techniques that has been developed to identify the user and automatically redirect to their own language page.

The methods have now been further refined. Determining the position of wireless devices is not possible without further ado. In the UMTS network (Universal Mobile Telecommunications System) there are shared public IP addresses of several 1000 users via NAPT (Network Address Port Translation), in order not to consume too many IP addresses as the guidelines. The cell phone tracking via a mobile radio cell is usually only possible if the owner of the device in the already agreed network manager. The same is true in general for mobile devices that have installed a GPS receiver, as is the case with more and more smartphones. In this case, the activation of the network operator is not necessary for this and can be done by the user himself/herself. Then can then, for example, use Google Latitude at any time on the mobile phones.

Opportunities and Risks of Web 2.0 Geolocation : Location Based Social Networking 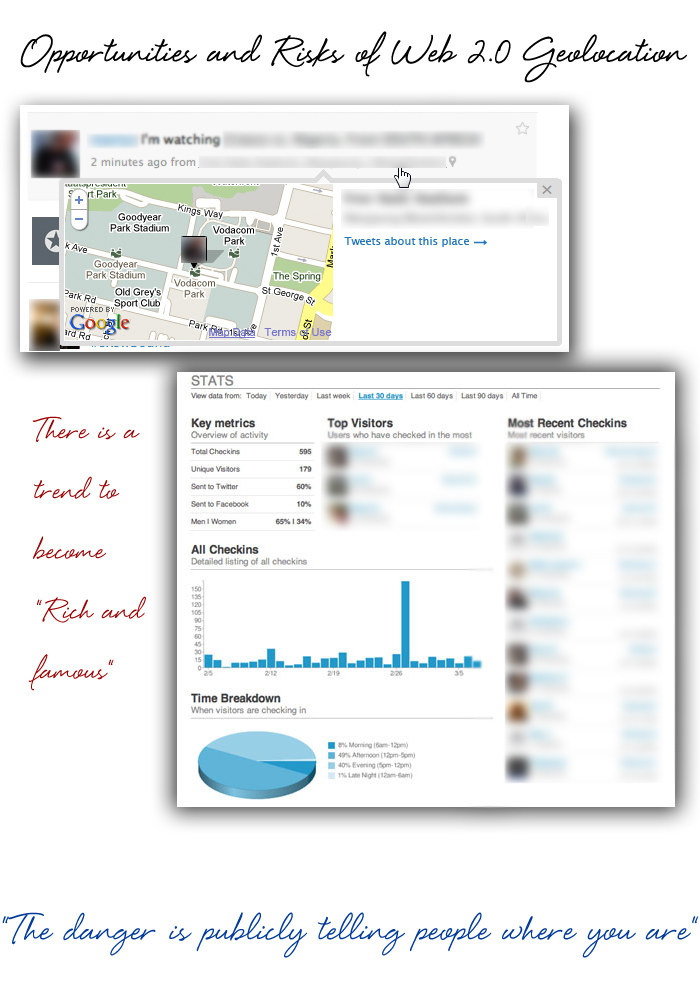 Foursquare and Gowalla were introduced in March 2009 for the first time and are enjoying increasing popularity since then, especially in the U.S. These two platforms thus paved the way for a new segment, the location-based social networking. They combine social networking with location-based services, gaming and business models. The basic idea behind foursquare and Gowalla is simple: through check-in at any location at any time to tell friends the current location. This is done easily with a single click, provided that the location is already registered in the system.

So far, the potential of LBS offerings were primarily considered. But the risks that come with it are not to be dismissed out of hand. In addition, potential threats to the individual, such as presented to the loss of privacy and possible misuse of collected data can never be ignored. Misuse of data is a major problem in today’s world and a highly current topic of discussion, as already stated at the outset in the introduction.
Children, however, will make their possibly overprotective parents rather obedience and always transmit their whereabouts. Of course, this possibility must be assessed overall as positive. Finally, the parents feel much more comfortable if they are always informed about the whereabouts of their child. Especially in case of an emergency service is very useful. However, it should not degenerate into a control freak, in the way that the child is always and everywhere under surveillance. “Please Rob Me” goes a step further and makes this information important : “The danger is publicly telling people where you are”.

References and Further Reading on Opportunities and Risks of Web 2.0 Geolocation

Tagged With opportunities of web 2 0

This Article Has Been Shared 705 Times!

Articles Related to Opportunities and Risks of Web 2.0 Geolocation