OSv is a Cloud Operating System for Running on Virtual Machines From the Creators of KVM. KVM is familiar to Linux users and fans of virtualization. Previously we talked about CoreOS, which is a Cloud Operating System, CoreOS and Net-install of a custom linux distro on Cloud Servers and How to Boot Custom Network Operating System on Rackspace. Today, we will introduce you to a new Project named OSv, which is a result of the decision to surpass the shortcomings of virtualization regarding cloud operating system, which wil be able to interact with the hardware directly without Linux intermediaries or other systems, resulting in better performance. Read about Kernel Based Virtual Machine (KVM) here.

OSv is Cloud Operating System for Virtual Machines From Creators of KVM. Who hangs out in this area knows that KVM is a virtualization infrastructure for the Linux kernel. At the same time, more experienced users know very well that to virtualize sometimes means introducing losses of computational capabilities that do not always allow for an application to get the most from the underlying hardware infrastructure. In addition, the control mechanisms and of blocking access to resources make the architecture complicated and therefore less efficient.

OSV (stylized as OSv) is a cloud computing focused operating system released on September 16, 2013. It is a special-purpose operating system built to run as a guest on top of a virtual machine, thus it does not include drivers for bare-metal hardware. It is a slim, bare bones system including just the functionality necessary for tasks it was designed to do. For this reason, it does not support a notion of users (it is not a multiuser system) or processes – everything runs in the kernel address space. Using a single address space removes some of the time-consuming operations associated with context switching. It uses large amounts of code from the FreeBSD operating system, in particular the network stack and the ZFS file system. It is managed through SSH which is implemented in Java using Apache MINA. Read about Virtual Machine (VM) here.

Resources and More on OSv, the Cloud Operating System for Virtual Machines

The creator of KVM, Avi Kivity, together with the ex-product manager for KVM For Laor have founded a company, Cloudius Systems, which aims to simplify the concept of virtualization through OSV, a cloud operating system. 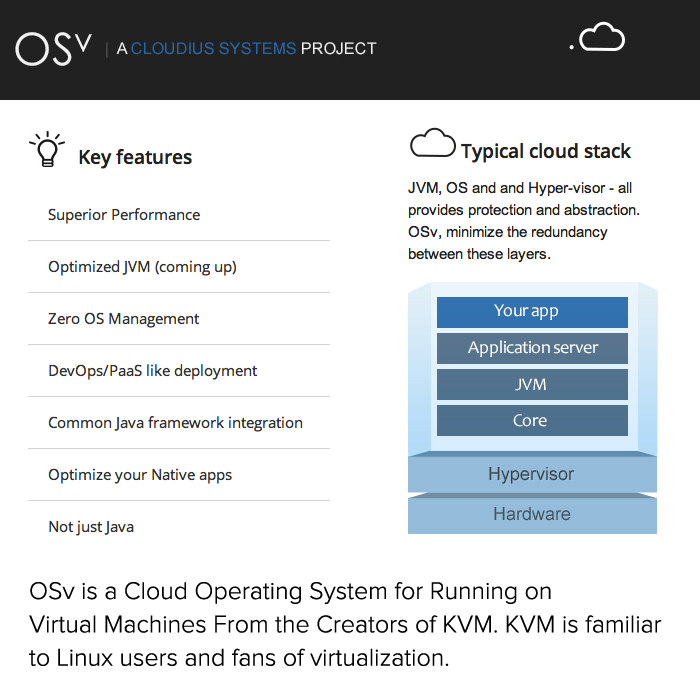 The basic idea of ??OSV is really simple. In fact, while VMware, Microsoft, Red Hat and many others struggle with each other to market their hypervisor and the corresponding host systems, the creator of KVM has had a brilliant idea that simplifies the concept of virtualization. This is an operating system designed for a virtual machine that performs a single application to adapt to the cloud, where the belief is based precisely on the distribution of workloads. OSV is in fact a bundle of sever an application and a Java Virtual Machine that directly communicates with the underlying hardware without the need for any Linux operating system, occupying the same address space of the kernel. OSv can only be built on a 64-bit x86 Linux distribution. Please note that this means the “x86_64” or “amd64” version, not the 32-bit “i386” version.

Resources and More on OSv, the Cloud Operating System for Virtual Machines

OSV is an operating system which does not need hardware drivers or special configuration, using the ZFS file system and boot times lower than the second.

OSV can already run on KVM, Xen and Amazon EC2 and it is expected the next support at VMware.

For now, the source code is already available for all programmers directly in the repository to GitHub .

More information is available on the official website of the project, located at osv.io and the official presentation held at the conference CloudOpen.