In fact, we install PHP component of SNMP for installing some web software as a package, it is required for carrying out some basic functions. The Simple Network Management Protocol is a network protocol which is designed for the network elements – routers, servers, switches, printers, computers, etc. from a central point in order being able to monitor and control. The protocol controls the communication between the monitored devices and the monitoring station.SNMP describes the structure of data packets that can be sent and the communication procedure. It was designed so that each network-enabled device can be included in the monitoring. The tasks of network management, which are possible with SNMP include :

Due to its simplicity, modularity and versatility, SNMP has become the standard which is supported both by the most content management softwares as well as the clients. SNMP does not rely on the network protocol IP as a transport method.

For monitoring the agents are used. These are programs which run directly on the monitored devices or hardware that performs the same tasks. These programs / devices are able to detect the state of the network device and perform well on actions as trigger. Using SNMP, it is possible to communicate with the agent via a network. There are six different data packets which may be sent:

GetRequest : for requesting a management record
SetRequest : to retrieve the following data set (to traverse tables)
GetNextRequest : to retrieve multiple records at once
GetBulkRequest : to change multiple records of a network element or a. Sometimes a network element requires the simultaneous change of several records to verify the consistency. Better version of GetNextRequest.
Response : response to one of the previous packets.
Trap : reporting of unsolicited message from an agent to the manager
InformRequest : Acknowledged asynchronous notification 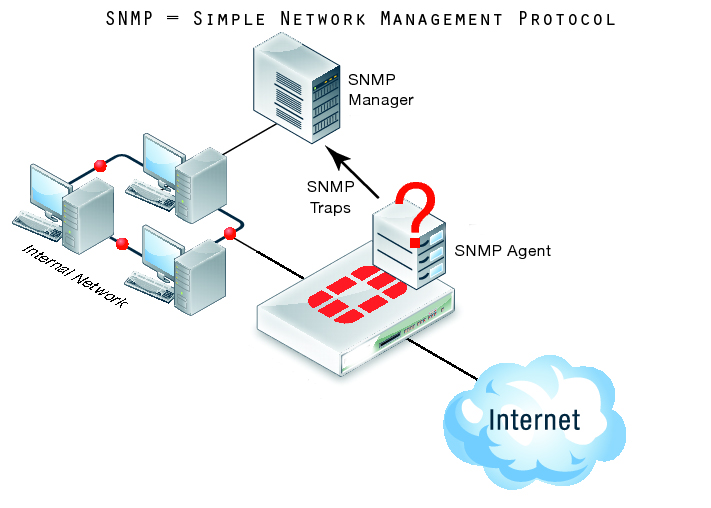 SNMP itself does not define which values ‹‹a network component can provide or must provide, since that depends on the nature of the component. The values ‹‹that can be read and modified by a manager over a managed network component, so-called Managed Objects therefore specified in a Management Information Base (briefly MIB). Within it are the description files where the individual values ‹‹are tabulated. The MIB is specific for a specific component (or a class of components, such as switches). Details of this part you will not get in Wikipedia.

The information in the MIB are organized in the form of a tree structure, whose individual branches can be represented either by numbers or alternatively by alphanumeric designations. MIB 2 is found, for example under iso.org.dod.internet.mgmt.MIB-2, which is uniquely determined by the number series like 1.3.6.1.2.1 (ISO 1, 3 for organic and so on). This consists of points and figures and is called an Object Identifier (OID). The MIBs are stored in individual RFCs. Within these RFCs, the object identifier with its five Object Type Definitions are clearly defined. These RFCs are in the description language ASN.1 . All data that can be accessed or changed by the agent in these files have a variety of information :

With the help of the description files, management programs are able to represent any desired SNMP agent the hierarchical structure of the data and request data from it.

Several such MIBs were defined in a number of technical and organizational documents on the Internet in RFCs. Particularly noteworthy is the already mentioned MIB-2, which is defined in RFC 1213 and is supported by all the network components. Besides the standard MIB there are a number of further MIBs defined in RFC for different technologies (eg. ISDN-MIB), protocols (eg. OSPF-MIB) or components (eg. UPS-MIB). They contain general objects such. Example, port status, router ID, state of charge of the battery and like that.

In addition to the MIBs defined in RFCs any manufacturer of software or hardware can have own MIBs, so-called private MIBs define the special characteristics of their product. These are among the OID iso (1) org (3) .dod (6) .internet (1) .private (4) .enterprises (1) in the IANA, one for the assignment of IP addresses, top-level domains, IP and protocol numbers are registered. Meanwhile, several thousand companies registered under this OID. These are done in a non-overlapping fashion.

This Article Has Been Shared 634 Times!