Data transmission combines methods to convey information from a sender (source of information) to a receiver (information sink). Information conveyed by electrical, optical signals or by electromagnetic waves. Technically, the transmitter transmits the signal in a physical quantity to the receiver and is measured at the end. In electrical signals, an electrical voltage or an electrical current is measured. In optical signals, the light and its difference in colors is measured. In other words, Data transmission is the physical transfer of data from a communication channel point to one point or multipoint. Examples of these channels are twisted pair cables, optical fiber, wireless communication and storage media. Data are represented as an electromagnetic signal, voltage signal, radio waves, microwaves or infrared.

In the data transfer, the to be transmitted messages or information is known as data. These data are shown in modern communication technology as a series of bits. A bit is the smallest unit of information or the smallest information carrier, which can assume only two states. These two states are often represented by 0 and 1. But there are also other conflicting state are conceivable. Such as to light on and off. The processing and transmission of data is usually in the form of bit strings.

To create the best possible conditions for data transmission in electronics and communication engineering, multiplexing and modulation techniques has been developed. Multiplexing method interlace multiple signals in order to use the transmission path more than once. Modulation methods bring the signals in a particular physical form, so that the signals arrive at the receiver as unchanged as possible or at least as identifiable.

The electronics of the data transmission is based on integrated circuits, in turn; consist of highly complex electronic circuits and the number of semiconductor devices. Thanks to the miniaturization of semiconductors, we are able to incorporate extensive functionality in a small space in every electronic device. In communications technology, this highly complex integrated circuits establish the connections between the transmitter and receiver to ensure the highest possible data transfer rate. 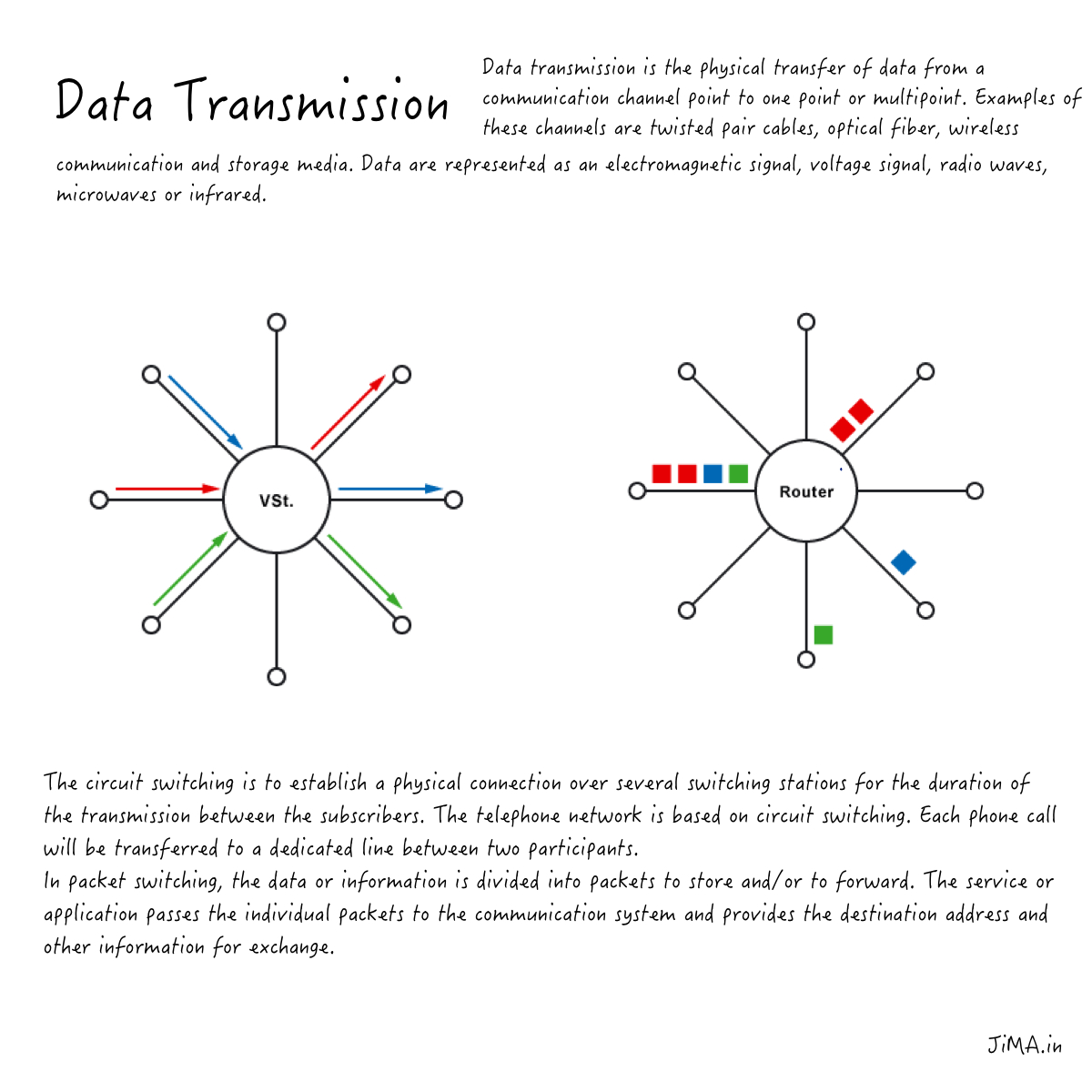 Although a telephone network is also suitable for the transmission of data, but only with technical tricks that could not evolve fast enough to be able to cover the ever-increasing demands on bandwidth. The importance of networking of data and people and the transfer of enormous amounts of data has increased steadily in recent years. With the implementation of the Internet and the transmission of video, audio, and video data, the designed for voice transmission technology has proven to be a bottleneck. The Internet using the World Wide Web and e-mail have demonstrated the importance of data networks with high bandwidth. For this reason, data transmission over the telephone network is a discontinued model.

In packet switching, the data or information is divided into packets to store and/or to forward. The service or application passes the individual packets to the communication system and provides the destination address and other information for exchange. The IP technology brings significant simplifications in the network infrastructure.

This Article Has Been Shared 871 Times!