Libswarm is an Open Source Docker, a Toolkit for Composing Network Services and Supported by Rackspace Cloud. We can aggregate all containers easily. The open source library allows us to move the Docker containers directly to Rackspace Cloud Server from different hosts, avoiding the lengthy previous manual method. If you are not sure what is Docker, before reading about Libswarm, you probably should read about Docker and Container Based Virtualization. This article is listed under Cloud Computing, not Virtualization – the reason written in the linked articles.

Official repository of Docker is here :

Official note by Rackspace is here :

Docker is continuing to keep quite a few new to the community that has formed around the open source project and announcements released recently indicate a stability and desire to assert itself on a market that is still untapped. In addition to the presentation of Docker 1.0, these days the company that wants to turn any application into a container. Libswarm, an open source project that is interesting for the development also saw the participation of Rackspace, a team has always been involved in the open cloud.

With Libswarm, the company that lives behind Docker not only renews its flagship product, but carries out the philosophy behind the product itself, which encourages the creation of an ecosystem of libraries and APIs that can make the functionality of the platform still simpler and more useful. Libswarm, in fact, aims to simplify, because it works directly within the Docker CLI and offers users the opportunity to move containers directly on new infrastructure on Rackspace cloud servers.

Rackspace has been working hard with the team of Docker, to prove once again how important it is to participate in the open source community initiatives, rather than developing proprietary APIs, which limits the opportunities for a wider reach. It would seem then that the attitude used against Docker is typical of Rackspace, although the Texas company has certainly looking at the future possibilities and implications of considerable interest sniffed for cloud computing in general.

The ease of integration with the cloud Docker is also guaranteed by a plugin, on which Rackspace has worked together on the project, which allows to spin the server directly from the cloud Docker CLI and to interrupt the emptying of the container, thus paying only for the computing resources which is utilized. 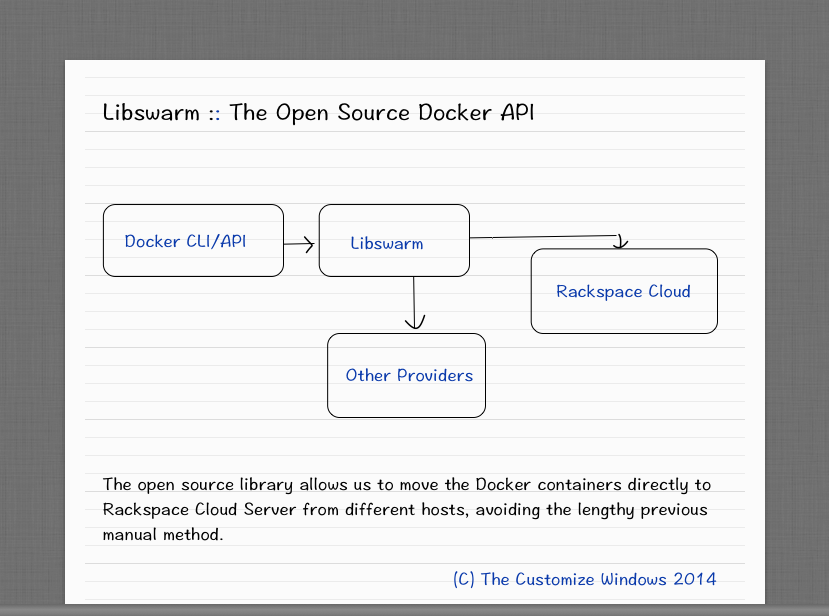 The flexibility of Libswarm represents a step forward, previously you had to first create the instance first and access the cloud server, install Docker, upload the image to a Docker Container in which both machines (the local and the cloud server ) had access and then launch the package.

Moreover, the simplification introduced by Libswarm is compatible with any backend cloud computing and not just with the one offered by Rackspace in full accordance with the vision of a Rackspace open cloud open on a global scale.

Tagged With what is libswarm