Here is Experience of an Orthopedic Surgeon who hand drilled own eyeglass to save solid $300 for a new pair! 100% Do It Yourself Project! I have three spectacles – one for very important work, second is for regular outside works and third is for usage at home. Obviously, I have lot of old frames, various types of screwdrivers. The one which got “fractured” was for home usage. The shop who delivered it declared that it is not possible to repair. I have to buy a new full set. A glass which have not cracked while the joining with the frame giveaway, it is unacceptable that it will not take drill, get crack etc. Actually it is not real glass but what you refer as “fibre glass”. Obviously I tried at other shops, all basically wasted time and added minor scratches before declaring that they are imbeciles.

Basically, all of these mid range to high end frames are patented. They have no support for the repair process. If our car windscreen gets broken, usually it is fixed, not replaced. The shops are kind of resellers the OEM products. So, there is no connection between the Lens Manufacturer and the Frame Manufacturer. In my case, the “fracture” happened in the part (obviously one side) where the frame has a mounting structure for the lenses by a Pin System. That Pin System is also “Patented”.

The metal was bad, it got corrosion and giveaway while opening. So the lens remained intact. They basically push the Pin in a way, which after my work, understandably uses an adhesive and/or heat. What the shop could not say (rather had no idea) – if drill is done over the broken part, the hole will become bigger. As it is a closed source hardware runs on Inkjet Printer business model, there is no way to get a single one sided intact frame which can fit the holes. I obviously pressured them for a new frame (the glass pieces were in great condition), but they denied telling 100% lie – “If we drill, the lens will get crack”. Can not happen, because it sustained more torque while the fracture happened. They basically do not know that we also use the drill machine, sometimes one set’s one screw get missing too!

So my broken one was like this (it is probably an inferior replica) : 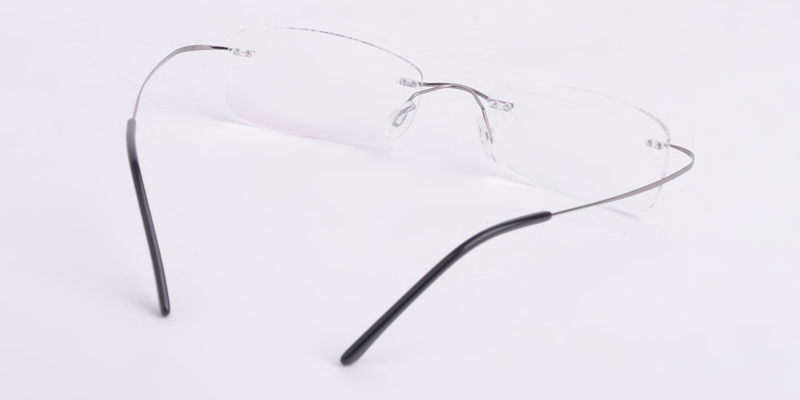 When I have to pay $300 for a “new set”, what is the problem to experiment? I can not steal a frame (unlike orthopedics screw, drill bit from the “smart representatives”), I had one rimless frame which had screw-nut based mounting system. My repair set was :

The set of Phillips 4 head Screwdrivers were from Japan, I guess it crossed the borders themselves to India’s Footpath to get sold. I can not read Japanese Language, I do not know the set number. But the smallest one was exactly just a bit bigger in diameter than the bore of the hole. Basically you’ll need only the Phillips screwdriver, screw driver for spectacle nuts and the frame. Others I used for learning :p I never knew about spectacle technology or rather Internal Fixation of Lens.

I thought that, I will pull out the things from the holes. So I entered the cutting needle and thread in between the Pin system on the inner side of the lens. I do not know anything better than a cutting needle which can ever do it. But it was not needed. I wasted 1 hours behind it. Do not try this way. It is impossible. Practically I got two minor scratches for this approach. You can not drill them out or push them out – this is the inject printer’s vendor locked model of business. They will get scratch or break. A high end user will not bother to buy another set, unknowingly encouraging the closed sourced model of business. The shops need not to spend extra effort – net profit from repairing versus new set will be very closer.

If you look at those little Phillips Screwdrivers, you will understand – they basically rotates on their own axis. That is the drill machine! The head is a bit of harder material : 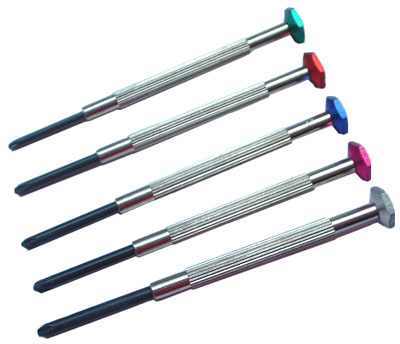 Basically, in orthopedics we often need to drill or cut using the older instruments – simple push and rotate, rotate and rotate…
Yes, if I had a motorized drill machine, it would be better, but as you can see on kind of split light on my MacBook Pro : 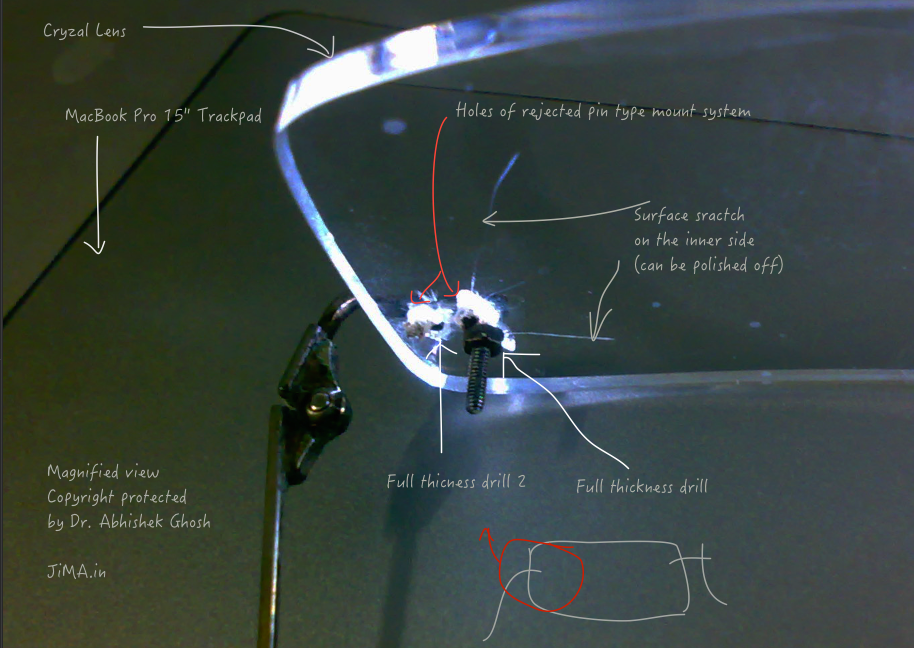 I did two full thickness holes by rotating the Phillips Screwdriver so that my old frame’s screw-nut mount system fits on it. I have transilluminated to make the scratches worser – that is the maximum “scar marks”. In real life, there is nothing visible. The major thing was the fitting – it was auto – because I use the same cutting size of lens whenever I get a new spectacle for cross-frame-lens compatibility! I did “inter-exchange” before, but this was an extreme work.

Two full thickness drills because – first was for the screw mount, second was for the another tiny rod like thing beside it (lack of better word) on the frame beside the threaded rod, it provides the horizontal stability to the frame. As the frame was for me, it need no extra effort to make the optical axis aligned. Lens are manufactured by Essilor. My index finger got sore after the manual drills, but yes – $300 saved. Why pay for a thing which has the main component, the lens in great condition.

Frame manufactures are liars, lens manufactures actually make better stuffs, it sustained all the torturous. So, we need an Open Source Rimless Frame hardware design, is not it? You’ll see almost all the frames get greenish colored corrosion – it happens because they uses copper at quite higher proportion in the alloy. They promote as “Titanium Frame”, possibly there is 0.000001 mg Titanium in 1kg of the alloy. I have to clean the old frame and dip to get chemically gold coated. How? I will give it as disassembled part to a jewelry shop! If third party does the whole process, they’ll charge $50 – $100 plus there will few million scratches on the coated surface. The glass needs a polish on its inner side – MacBook Pro has a nice cloth for the purpose. That glass is more costly and hard.