Apache Drill is SQL Query Engine for Hadoop, NoSQL, Cloud Storage and file systems including HBase, MongoDB, MapR-DB, HDFS, MapR-FS, Amazon S3, Azure Blob Storage, Google Cloud Storage, Swift, NAS and local files. As example, we can join a collection in MongoDB with a directory of event logs in Hadoop. Apache Drill features JSON data model which enables queries on complex and nested data. Drill has extensions to SQL to easily query complex data. We can install Apache Drill on single cluster or multiple cluster. Here is how to install Apache Drill on Ubuntu 16.04 LTS single cloud server. Drillbit is Drill’s daemon which runs on each node of the cluster using ZooKeeper for all communication in the cluster. Drillbit which receives the request from the client is called Foreman.

Follow our basic server setup guide to create a user with root privilege and enable other optional basic security.

Now we need to update newest version of Apache Drill :

Use the following command to log into Drill Command Prompt :

To start the Drill shell in embedded mode, we will use the drill-embedded command which will use a jdbc connection string and identifies the local node as the ZooKeeper node. So we will navigate to the Drill installation directory (/usr/local/drill in our case) and run the following commands :

To exit the Drill shell, we need to run !quit as command.

To install Drill on nodes, we need to configure a cluster ID and add Zookeeper information. We need install Apache ZooKeeper :

ZooKeeper will be started as a daemon listening on port 2181 :

I am not describing those steps for cluster configuration as it can be a separate guide in future and optional for test purpose. You can access the Apache Drill Web Interface with this address pattern : 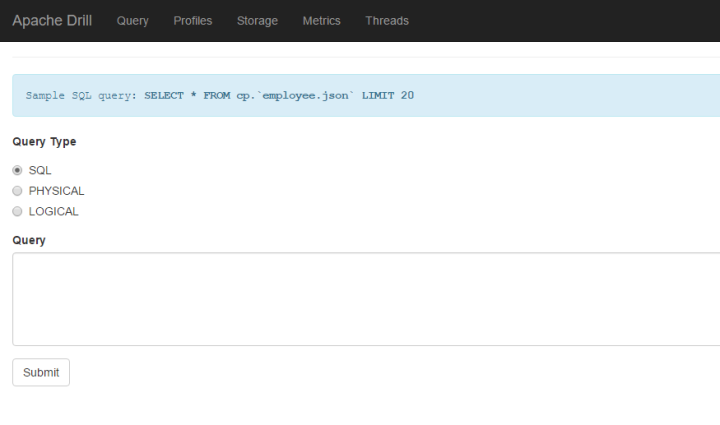 Rest you can read from Apache Drill’s official documentation.