Here is the source code and steps to install a Command Line Music Player with Visualizer to play music from iTerm2 or Terminal or from SSH. Previously, we talked about Herrie – a good, stable CLI Music Player. The players name is Open Cubic Player, it possibly has a GNU GPL License, but the developer is quite restrictive about development, porting etc. – clearly written to inform the Author about developmental approaches. Difficult to interpret the mentality of the developer. The person, apparently is not active about the project after 2011. Developer’s name is Stian Skjelstad. May be English is not his native / everyday used langugage. It is quite old, appeared around 1994 for virtually all Operating System.

One person Ported the source code of the music player to old Mac OS X, another to latest OS X compatible version. We prefer to build the software instead of using repository version (exists for GNU Linux). OS X version has many patches to run rightly. Sadly, the Visualizer might not take color. There is no proper man entry.

You can use the command brew install ocp if you have the setup of iTerm2–Homebrew–ZSH like ours. For testing purpose that is good, for developmental purpose, it is bad way. 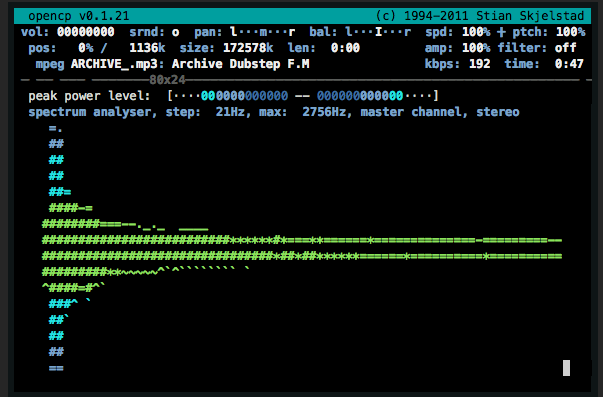 The steps to build from source can not be different! But OS X version is unofficial, maintained by another person. The original source code is now kept up to date by another person on SourceForge. Do not try SourceForge version on OS X 10.10 or above.

If you go to any directory, where there is music files (on command line), running this kind of command, will evoke the player :

There is a file named ~/ocp/ocp.ini, about which written here :

Otherwise you’ll not get color in Visualizer. Ubuntu has a man page :

This Article Has Been Shared 729 Times!