Here is RedHat OpenShift ASCII Logo and Shebang Script For Decorating Your rhc Client Tool. Enjoy the ASCII Art While Enjoying PaaS Cloud. We have published HP Logo as ASCII Art for the HP Cloud Users. This time, we are releasing another ASCII Art!

There is obvious legal matters :

Basically, unless someone is claiming that – the Art is created by me HENCE the logo is mine, it is not illegal. Abnormal and invalid logic.
Quite obviously, this is an intellectual property of RedHat and OpenShift. This is a community development for decoration.

RedHat OpenShift is less restrictive about Logo than HP because the later has lot of Hardware products. Obviously, you should not abuse it. Abuse means – if you put in your website’s sidebar in a manner, as if you are official personel of RedHat OpenShift, then it can be abuse. You have to append “Site Powered By” or “We Support” like phrase. Obviously, ask RedHat OpenShift for such usage. 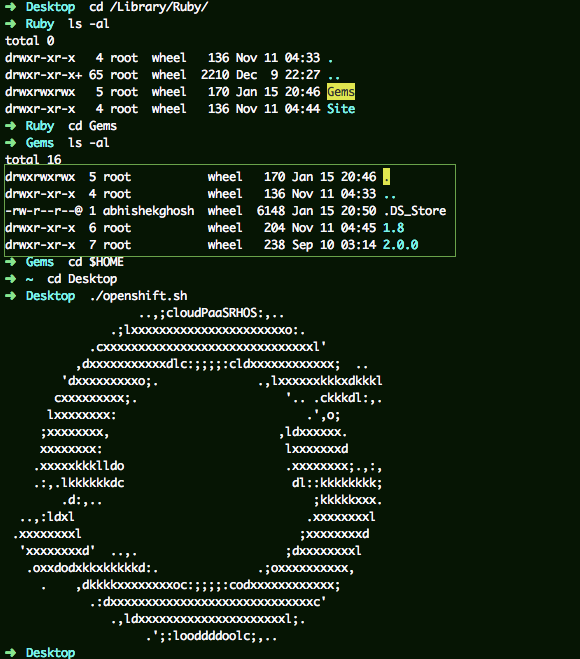 So, we are talking about the rhc client tool, which is a Ruby Gem.

In case of HP Cloud, we added things on the instance. But, in this case, we are Editing the rhc Ruby Gems. As Ruby Version can be different plus there are hundreds of modifiable things for Ruby – OS, OS Version, Ruby Version etc. it is not possible for us to Edit and supply you a readymade thing. These 9 Gems associated with rhc tool :

In case of OX, you have to navigate to /Library/Ruby/, then right click and select Get Info and change the Read Only Permission to Read and Write. Then open Terminal (not iTerm2), run sudo su, then type :

You will get your group name. It is usually staff. Usually the file ownership is :

We talked about UNIX Wheel Group, this is an example of UNIX Wheel group. You need to chown the file you want to edit :

As root also a member of wheel group, we can add staff. It is sad to become staff after paying $2500+ for a MacBookPro! Basically, for these various reasons; both Richard M. Stallman and Linus Torvalds removed the UNIX Wheel Group in GNU Linux. It was for the mainframe computers running original UNIX. Story of 50 years back.

Editing is fully up to you, there is doc on OpenShift’s site and you have manually look and Edit. What we have done, we have added a Shebang Script (Shell Script) for preview. We have not added the Red color unlike we did for HP. Because it is Ruby.

For Local testing, do these :

This Article Has Been Shared 491 Times!