This is Somewhat an In-House Development of a Web Shell For OpenShift PaaS With Just a Name. We Need To Make the Things Easy to the Noobs. First thing is that, the whole cartridge can be easily hacked or destroyed by anyone. Second thing is that, we have no credit for the JQuery, CSS or the RAW UI Part. This is near Alpha release. It can happen that, you have developed a JQuery or the CSS and you’ll jump on us for the credit – kindly understand, this is; somewhat local deployment! We will definitely give all the credits to all. We are using it for OpenShift PaaS for another set of reasons – basically a script like we developed to install OctoPress on OpenShift works in a far better way than a heavy cartridge. But not all still can use them. There are different levels of users. If a noob is guided properly, it can do many things. In ordinary Shell, we never get that “guide”. There are lot of web shells. We released it for deploying some idea, if you run rm *, frankly, that has no credit. OpenShift has web shell, that is not hugely important thing. If you like this shell, that is great; but this is exactly not for that purposes.

We have iTerm2? You might not have a Mac. You can have this OpenTerm. Temporary address is this :

You’ll login to the location named virtual device. It is about trust. If you run rm * at any directory, you are destroying the Freedom we allowed.

Please cd to /tmp and do whatever you want. Delete the stuffs before you log out. Obviously, we will flush regularly. 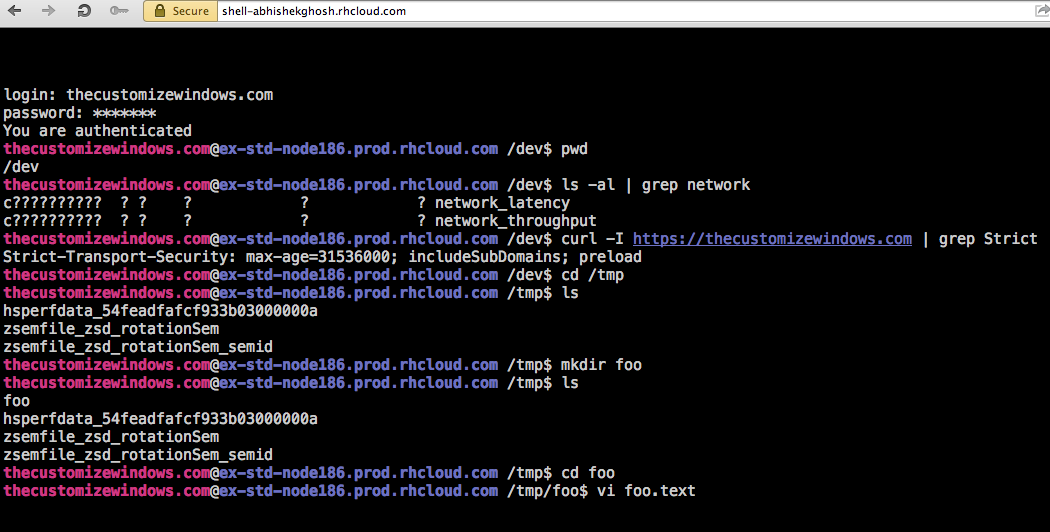 View the screenshot in full size.

If some command does not work in the Web Shell and the Web Shell itself does not say anything, reload the webpage. We have many ideas to realize – be it the current issues with OpenStack Swift’s limitations of uploading methods [here is a script to upload to OpenStack Swift] or making the cartridge method more easy.

This Article Has Been Shared 604 Times!