Overclocking Raspberry Pi : Make Sure That You Know About Processor and Overclocking

Raspberry Pi 2 Model B is the latest model at the time of publication of this article. It is powered by ARM Cortex-A7 quad-core processor. We talked about ARM Processor and Overclocking before. If you are beginner, you can also read about Raspberry Pi itself.

Depending on the model of the Raspberry Pi, it has a CPU clock rate of 600 or 700 or 900 MHz. If you would like this can be the Raspberry Pi overclock depending on the model above 1000 MHz. You should be aware that overclocking will shorten the life of the Raspberry Pi and may cause system instability. Also, if you have the Turbo Mode, you canchoose from one of five overclock presets in raspi-config. The level of stable overclock you can achieve will depend on your specific Pi and on the quality of your power supply. You need nothing to do more than selecting the options if your board is newer. You will get the text based user interface and can overclock : 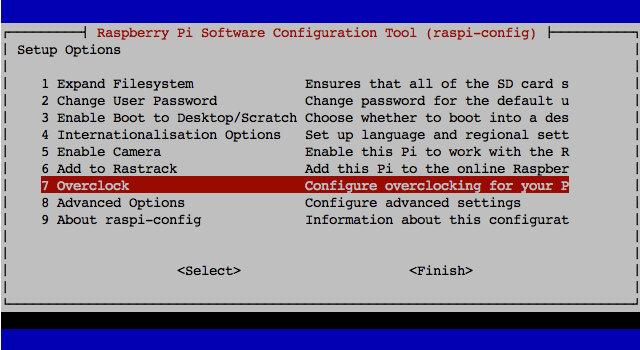 If that option is not available, then you’ll work from command line, which is expected in the older models. If your board is older, then :

Find the line arm_freq = and change the value by ~8%. Save it. Reboot.

This Article Has Been Shared 660 Times!