You must not play with a production server. Take a server snapshot in case you are using OpenStack. May be you can install on local computer first. With Homebrew package manager on OS X, it is very easy to install, simply run the command – brew install mc. First test by running this command – mc. mc should evoke the application. If not, then you need to perform some more steps :

You might need to add these on .bashrc or .bash_profile depending on your setup, correct the version number :

mc should evoke the application.
get text, libffi, glib are the dependencies of Midnight Commander. 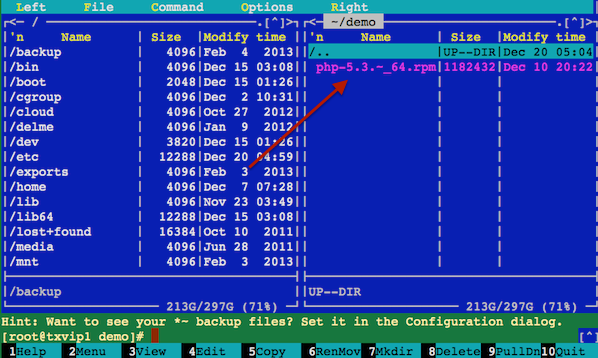 There is a PPA for Ubuntu / Deb GNU/Linux, you can add it and install :

It is quite easy to use, the configuration file is located at ~/.config/mc/ini, you can adjust these settings :

You will get used after few minutes of usage. Just like OS X, mc command evokes the application. There are other file explorers which offers text based interface, but this Midnight Commander mostly known. These are development of the mid nineties like many beautiful command line softwares.