Advertisement
You are here: Home » Software as a Service and GNU GPL Licensing
Advertisement

Software as a Service and GNU GPL Licensing is Not Complex, the Motto of the License is For Disallowing the Softwares to Control the Users and modify, distribute, develop, use the softwares with full Freedom along with the other points written in the License. With time usage of Software as a Service (SaaS) has been increased. It is more important to understand the fact – for commercial purposes, abusing the words such as Free Software even Open Source or an ill-defined word – F/OSS should be avoided instead clear license or a different License should be chosen.

Software as a Service and GNU GPL Licensing : May Be Unlinked

Software as a Service and GNU GPL Licensing are not always linked. We are explaining some of the most commonly asked parts. At any point, Richard M. Stallman’s and Free Software Foundation’s opinion overrides our opinion on both Software as a Service and GNU GPL Licensing. Richard M. Stallman is never known to be a great supporter of Cloud Computing. If we take the phrase Cloud Computing as a terminology related to business model, then also it is actually possible to run a Free Software on one or multiple servers and provide the users to use certain paid service. But the practical issue is that, some of the softwares still used build up to the phrase Cloud Computing (like for the backend softwares) are not under GNU GPL. A service comes under business laws and most importantly on the moral value not to do harm of the others, not a software or creation license itself.

GNU GPL 3.0 does not gives any warranty of the service itself. Delivering a paid service needs to follow a warranty or agreement which might be separate from the software itself. One who has doubts should wget one cone copy of the GNU GPL 3.0 License and read it :

One can definitely download the copy of such software like WordPress to modify, redistribute or run on own computer. GNU GPL Licensing is about the spirit. There are magazines (like “Linux Magazine”) which deliberately confuses the developers. Definitely one can deliver paid services by running a software for reduction of the cost. GNU GPL license is not intended for imposing any restriction. The GPL is applicable to the people who agree to it. Generally, we agree to the GPL because we want to do something that copyright law says that we may not do without a license such as distributing or modifying a work.

If you sell a software under GNU GPL 3.0, the sell carries your liability to provide the services to make it working, who has not purchased your software can use, modify, redistribute but will not get your “paid service”. 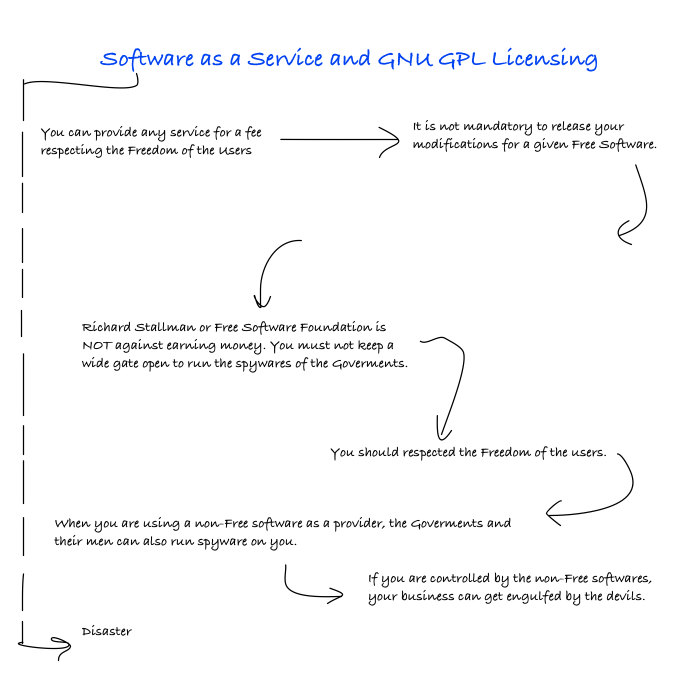 Software as a Service and GNU GPL Licensing : Do I need to Make My Source Code Available?

GNU GPL Licensing is intended for using, modification, redistribution (and not limited to) a particular software. See section 10 “Automatic Licensing of Downstream Recipients”. You should not use GNU GPL License itself as a promotive phrase. This is frequently done by the WordPress paid theme and plugin developers. They try to impose the copyright acts if the same is distributed. Such parties should not use GNU GPL License on moral ground. They should use Creative Commons or other suitable License. It is frankly a moral matter, GNU GPL Licensing is not intended to run a ponzi scheme, stealing others’ creative work. Best example is – you should not copy paste the webpages written by Richard Stallman from stallman dot org, claim as it your own and put Google AdSense Ads to make money out of it.

It is very clear that almost all of Software as a Service (SaaS) providers is using than distributing the application.

On the contrary if you are creating a package which allows people to create websites. that clearly falls under distribution – but this is not the case with you.

Software as a Service and GNU GPL Licensing : Do I Need to Release a Running Version on Usage?

No. If you are running a software under GNU GPL Licensing, you never need to release your version not excluding the part must be kept secret, like the passwords. We are running this website on the top of WordPress, but basically we never need to release the modifications done by us – releasing is about the moral value. FSF or the GNU GPL Licensing never “Forces” anyone to do perform anything. The GPL only applies when a program is given to another party for practical works.

Software as a Service and GNU GPL Licensing : Result of Violation of Using GNU GPL?

Other developers can re-write the code freshly and release the software under true GNU GPL 3.0 without the moral need to honor you. When you are respecting the moral parts, the spirits of GNU GPL, others will respect you. When you are using GNU GPL Licensing as tool for marketing; it is definite that, if you try to restrict the users Freedom, today to tomorrow; other developers can re-write the code freshly. Neither you can do anything under the copyright acts nor Free Software Foundation is going to support you.

Hewlett-Packard uses Licenses for some of their own developments many decades which are closer to the spirit of Free Software. Business can run with GNU GPL softwares because Quality of the Paid Service has nothing to do with the Freedom of Using the Software. You can not copy paste the logo of Hewlett-Packard. Hewlett-Packard is one of the good supporter of Free Software Foundation.
Like we need to write on Microsoft Windows 7, Cloud Computing for gaining traffic to earn money and warn, inform the users about the potential dangers, encourage them to use Free Software compatible softwares; you should provide the paid service by running the Software as a Service with a Free Software with good morals. Using the word Cloud does not make the malware active. You can definitely provide an email service with the promotive words running on the top of Free Softwares to catch the clients. If 50% users searches with “Cloud Email Service” and you catch them, we do not find any wrong in it – it is acting as a reverse mechanism to destroy the surveillance works.

You should not allow anyone to put a malware for Governmental Surveillance or even if you are being forced, you should disclose it. It is never mandatory for you to release the modification of such main software. At the same time, you must avoid the usage of the non-Free softwares which actually can control the users including you as the provider.

Articles Related to Software as a Service and GNU GPL Licensing