Rising Operating Costs and Growing Hardware Requirements Forcing SMBs to Think About Cost Saving Options. Many therefore rely on virtualization of their IT infrastructure. But When Virtualization is Worthy for SMB? Virtualization for business was discussed before as multi-part article. This article focuses on the need for Small and Medium Size Business only.

Basics Reason Behind Using Virtualization By the SMBs

With virtualization an abstraction layer between the operating system and hardware is created, this is the so-called hypervisor. This allows the creation of virtual containers (VMs) that have the same features as physical servers in terms of CPU, memory, disk space or network interfaces. This is primarily done to consolidate many, lightly loaded systems to a few, well-utilized systems, which at the same time decoupled from the hardware and can be relocated on the virtual machines.

This management part of Virtualization is flexible and allows the administrator to increasingly take care of other incidental tasks. The hardware costs are reduced because the virtual servers can operate the legacy applications properly and new hardware can be virtualized very quickly, regardless of the provider.

Another important factor is the energy costs, since less power is consumed by the reduction of the physical server. In addition, it is possible to run multiple guest operating systems running on a single physical machine, regardless of whether the operating system is Windows or GNU/Linux. In addition, maintenance can be better planned, since the current systems can be moved from one server to another without interruption and even without a central storage system.

In general, if there are resources that are not used, then virtualization is definitely interesting. For a virtualized environment stable hardware is essential. In addition to the servers a central storage system is required in many cases, which must necessarily be adequately dimensioned.

In order to implement a high-performance infrastructure here, an assessment is necessary, which must also contain detailed data about the application behavior in addition to the number of servers to be virtualized. Leaving aside this analysis left out, there is a risk that either too much resources are been used, which causes unnecessary costs, or wrongly using lesser resources, which can lead to non-functioning of the entire environment. 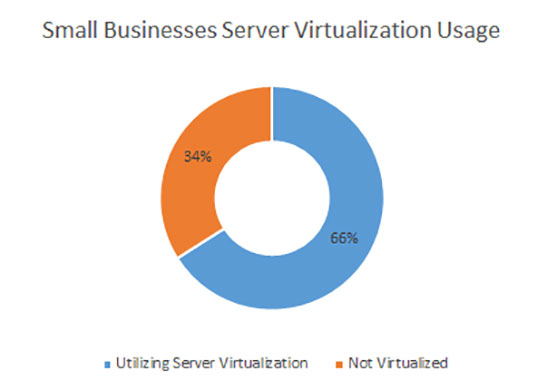 When Virtualization is Worthy for SMB?

Technically virtualization makes sense only when at minimum five servers need to be virtualized, because with a lower number of servers, the default risk is increased by the consolidation process. In order to prepare against a corresponding reliability and high availability, the business need to invest in fee-based solutions. Accordingly, thought and plan should be carried out for the execution.

Articles Related to When Virtualization is Worthy for SMB?