Why Adding Microphone Makes Binaural Stethoscope is a Bad Idea

Original Laennec Stethoscope ( the third version Laennec ) is factually baton like. All probes are like small batons. Piorry type stethoscope is not bad looking at all. Adding a detachable microphone with circuit to Laennec’s original design works fine to convert it to “stereo sound” on need. Circuits to amplify, control the frequencies can be easily done with FOSS design hardwares. Cost of the wooden, ivory is far higher and good craftsmanship is the major challenge. However, one can use a very cheaper wood for economy grade Stethoscope. Current 3M stuffs costs like purchasing a hand held USG.

Electromagnetic diaphragm is a capacitive sensor, coated with a conductive material. A conductive plate is positioned behind and parallel to the diaphragm. In this way the conductive elements form a capacitor. It forms an acoustic sensor, which is like the condenser microphones. So their Electronic Stethoscope works like good Stethoscope – pressure dependent bell & diaphragm change.

A condenser microphone operates on the basis of air transmission which cannot be placed against a body to record sounds originated within the body directly. Electromagnetic diaphragm is patented. In other words – adding a condenser microphone to ear piece with circuit to control input-output sound by loudness & frequency works fine. 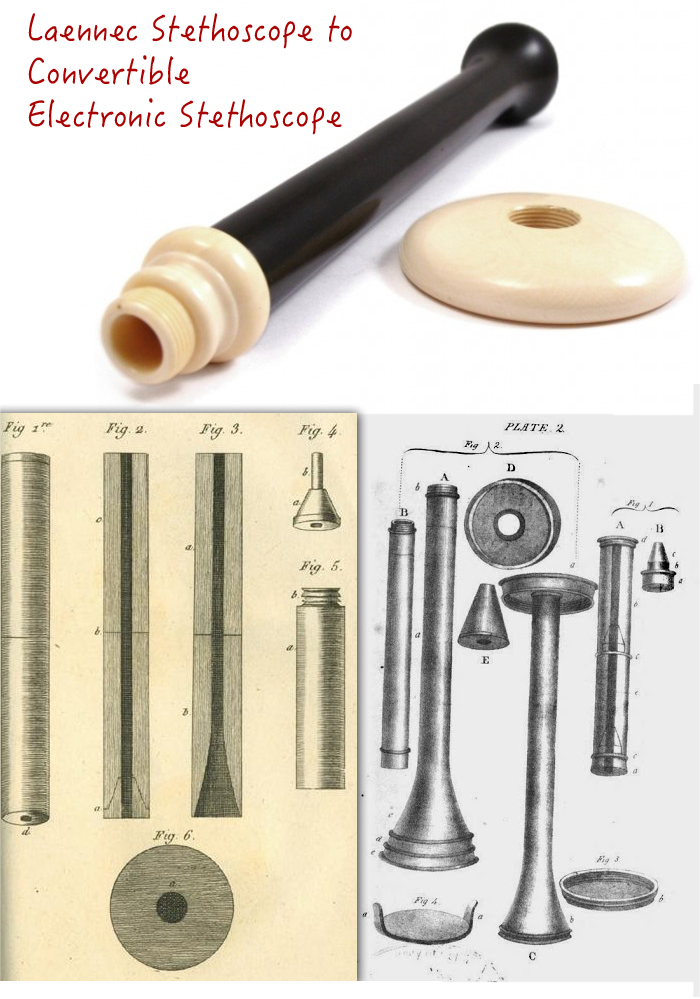 Original Laennec Stethoscope had certain reasons to use it in day to day clinical works.
It avoided a young female patient to factually strip & place the ear directly on chest wall. Most sounds which were barely audible were magnified. As the Laennec baton used to hold by palm and patient’s eyes were perpendicular to the examiner, it was sober and firm pressure could be applied. Later, several modifications of original Laennec Stethoscope was done and acoustically stable design was devised. The modification was mainly by adding ivory as ear piece. Traube type stethoscope and Piorry type stethoscope were made near standard with different attachment. Suddenly, one person added a flexible tube between the chest piece and the ear piece in a design (Golding Bird’s instrument ). Arthur Leared invented a binaural stethoscope which in 1852 George Philip Cammann redesigned. It was true “stereo sound” having 2 separate chest pieces for two ears. That was probably demoted as we hear sound of one point. All types of breath sounds & heart sounds were described at this point of history. Current design of binaural stethoscope’s designing was done without understanding what Laennec wanted to do –

Indeed, at the beginning of 1900, several clinicians were not in favor of current design of the Acoustic Stethoscopes. Sir William Osler had his own mono-auricular Acoustic Stethoscope. Adding the flexible tube broken the design principle of original Laennec stethoscope. Instead of single piece of wood, a tube filled with air added. Dr. Littman’s original design is currently in use among all the Acoustic Stethoscopes. They have a basic problem of less louder sound. Dr. Littman himself indirectly pointed to depend on other modern clinical instruments with it. In the year 2015 Dr. Tarek Loubani released an open-source 3D-printed stethoscope based on the 1960s-era Littmann Cardiology 3 stethoscope.

Already some orthopods & others started to set IEEE Standards for our stuffs. An IEEE Standard need to be set. Problems of current models are –

Testing Laennec Stethoscope third version or Traube type stethoscope clinically for better acoustics in quiet room with so called great stethoscopes will clarify which are comparable.

Adding a snap on embedded DIY circuit (initially) with one side condensor microphone, another side the PCB with sound processor to the ear piece end works fine. Circuit with basic electronic parts will work fine. 3 x AAA battery should work to power. Now, one can listen with Apple EarPod. OLED display will enable to see the volume & frequency control, even wave form. Even there is simple Arduino projects with 20Hz to 20KHz microphone with adjustable gain. There are many DIY guides for creating such circuit, which will pickup the sounds via microphone, add gain, remove noise and deliver the digital sound. Indeed there is one such :

Except the anesthetists, none would face problems. Only the anesthetists need Acoustic Binaural Stethoscope. That is the only odd position to auscultate to confirm the placement of tube. Computer-aided auscultation (CAA) in Free Software Development Model Can Really Progress. I have no doubt that Monaural will perform better & can be tested by any instrument. For that reason of performing better, the old clinicians wrote the books like as if they can see.

This Article Has Been Shared 177 Times!