Advertisement
You are here: Home » What is Cloud Computing in Simple Terms?
Advertisement

Cloud Computing is not a technology but cost saving server configuration & way of payment. You read the correct. Whoever is used with managing dedicated servers, networks for many years will agree our easy description. Commonly many peoples write superfluous words to start explaining what is Cloud Computing in simple terms. The technology behind cloud computing is virtualization. That virtualization is related to capability of microprocessor. Not all microprocessors support virtualization. No, as user you need not to know much about cloud computing – it is pushed as a marketing gimmick. Cloud Computing is inferior to dedicated physical servers. You possibly heard that DropBox recently moved from cloud to own datacenters. When DropBox had less fund, they needed cheaper solution, they had to use servers using cloud computing or rather cloud servers. Cloud Computing is cost effective (compared to dedicated), easy for administration purpose (for things like servers), payment terms usually on pay as you go model, not much service level agreement with the vendor (again, for things like servers) and so on. Cloud Computing is bargain with the higher cost of owning or renting dedicated resources and also can be a compromise with data security.

You have one physical computer with internet connection, perhaps a real physical router. May be your whole house has 2-3 such separate physical computers with internet connection. Now we can install a software on one computer for adding a layer of virtualization (free cloud computing software like OpenStack exists for the work, paid softwares like VMWare exists) and add the other computers in this pool – they’ll be called Nodes. Now your total amount of physical RAM, CPU power, Hard disk gathered at one computer by addition of OpenStack software. Now with OpenStack, you can create many “virtual computers” – with your desired RAM size, CPU, hard disk size, operating system. As I described the setup with your home computers, you will need separate hardwares named thin client (which frankly can be your Android tablet or iPad) and/or switch, KVM with monitor to use each of these “virtual computers”. Advantage is that – you can create each computer with limited RAM for one purpose, create a fresh new “virtual computer” to your guest or new family member. As you are not selling, it is difficult to bring the pricing matter but basically anyone can understand that each of these “virtual computers” cost nothing more than the setup than “real computers”. 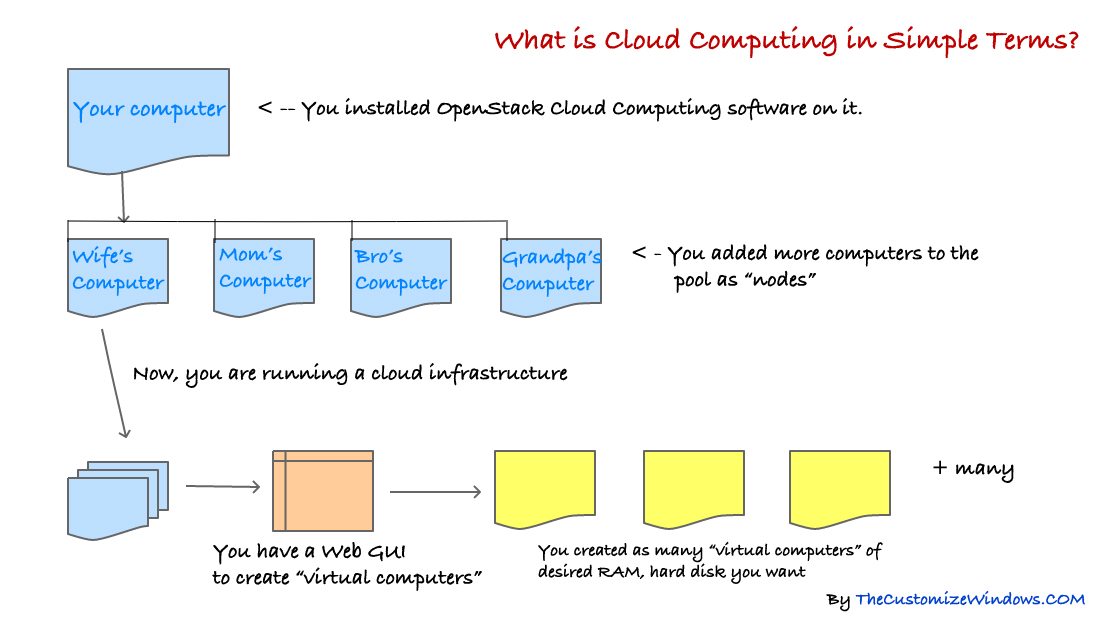 Yes, it is so easy. You can search with OpenStack and find source code. Who develops for OpenStack they do not promote cloud. Users, websites like us talk about “how to install WordPress on Rackspace on Cloud Server” for practical reasons, optimisation on “virtual server” has difference and even it differs from vendor to vendor. We say for cost saving or webmaster who has lesser budget to afford a dedicated server. Good dedicated servers will not have low 1-6 GB RAM, RAM will be 32 GB or more. For a small site, with 32 GB RAM what an ordinary website will do?

Is Cloud Computing is Very Powerful?

No. Dedicated physical resources are always more powerful. Unlike the desktop computers, server architecture can be made fault tolerant, the components like RAM, hard disk can be added or removed on running condition.

Then, How Cloud Computing Makes Cheap?

Server components become junks after running for 5 years – they are running 24×7. So much CPU, hard disk commonly not used – RAM always used up like on desktops. By using softwares and diving them to many “virtual computer”, “virtual storage”, the money comes back by selling to many. Also maintaining fewer dedicated physical computers is easier, needs less skilled manpower, sucks less power than similar number of real dedicated physical computers.

Articles Related to What is Cloud Computing in Simple Terms?