Advertisement
You are here: Home » How to Install, Configure, Secure MongoDB on Ubuntu 16.04 LTS
Advertisement

MongoDB is a modern, lightweight, scalable NoSQL Database. MongoDB stores data as JSON-like documents and data structure can be changed over time. These are few points which makes MongoDB great choice for wider usage in data sciences to mobile application. Server with 512 MB RAM server is enough for basic testing purpose. Here is step by step guide on how to install, configure, secure MongoDB from SSH. For this guide, we are using Ubuntu 16.04 LTS as server operating system.

How to Install, Configure, Secure MongoDB

SSH to the intended server and become root. In case it is public server for long term use, definitely you should follow some steps like we described before in this article to secure the server.

We have to add the key as next step :

You’ll get this kind of correct response :

Next, we will add the repository at /etc/apt/sources.list.d/ with one line command :

We are installing community edition of MongoDB. MongoDB repository contains the following packages:

Run these two commands to check MongoDB started, running and enable on reboot :

If we run the command :

It starts MongoDB shell. If we run :

on that interface, we will become admin with this output :

To create the user admin with password admin123 as admin run this :

Find the keyword ExecStart=. You’ll get the default line as :

Save the file. Now, open this file :

Find the keyword #security. Add this line at that place :

Now, if we run the command :

It will not refuse. But, if you run command like show dbs, it will refuse with this kind of error :

To correctly login, we have to use this kind of command :

Now if you run show dbs, you’ll get some valid response like :

Run a cat on the settings file :

now, we can login with this kind of command :

To configure TLS/SSL go to :

Again, open this file we opened before :

We can add more settings : 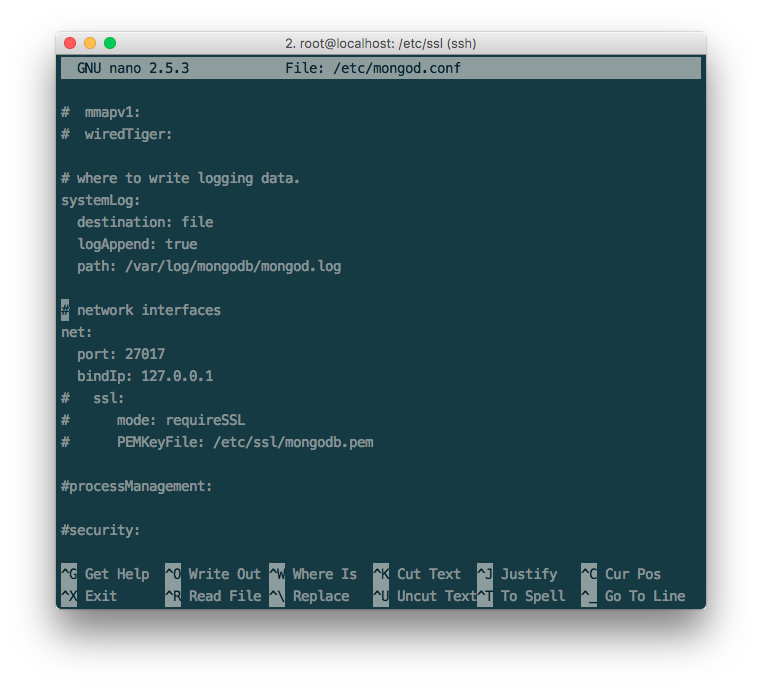 You’ll get detailed information on SSL/TLS configuration and also commands to login :

Articles Related to How to Install, Configure, Secure MongoDB on Ubuntu 16.04 LTS