What is Stop of Exposure in Photography? For a washed-out looking photo (overexposed), it is convenient to instruct someone to adjust stop by one or couple stop to get the normal feel. Stops are approximate. Exposure has no unit. We can not say how many stop exposure overall as photo received. Stop just describes the relative changes in the amount of light let into the camera. In easy language, one stop in photography means either double or half-light than the light in previous settings. Exposure depends on the shutter speed, aperture, and ISO. As in traditional film photography, there was no preview, useful exposure meter and instant image result, the calculations were quite important. The parameters and exposure triangle are still important but ISO and the film have been digital and for being digital, there is some variation of result from brand to brand, at least up to mid-range APS-C cameras. An f/stop is a measurement of exposure. Exposure is made from the settings, making up the exposure triangle – shutter speed, ISO or aperture settings. Understanding stop in digital photography remained important as it was in film days.

What is a Stop in Photography in Technical Way?

Exposure value (EV) represents a combination of a camera’s shutter speed and f-number, in such a way that all combinations which yield the same exposure have the same EV value. The difference of 1 EV corresponds to power-of-2 exposure step, referred to as a stop.

The EV concept was developed in the 1950s with the intention to simplify equivalent camera exposure settings by replacing combinations of shutter speed and f-number with a single number like 15. Some automation was also employed, which actually was great for the beginners but not for the advanced users.

From the concept of the exposure triangle, we have 3 kinds of stops – ISO stops, shutter speed stops and stops in the aperture. Because simple three are the factors to control light.

Doubling the ISO makes the exposure twice, so the new settings increase by a single stop. In digital photography, we try to keep the ISO towards lesser than promoted by the manufacturers to avoid noise – we use the ISO values common for films – 100, (125), 200, 400. It is easy to understand how much light will be for ISO values such as 100, 200, 400…1000.

ISO value of 10,000 probably impractical and really reserved for very low light for a desperate attempt. Unfortunately, digital sensors made ISO a joke beyond a value. “Feel” of ISO 100 and ISO 400 film was/is different. I am not comfortable with ISO in digital cameras. It is risky without live view on a bigger screen to guess various kind of noises. It is better to try to keep the ISO within three options – 100, 200, 400. For different reasons, 125 has special importance.

It is a slightly complex matter of physics and the most important matter in photography (in most cases). This is what will be varied for the price of the lens. Also, this will invite various artistic effects of the photo.

Aperture is measured using something called the f/stop scale. We often forget that aperture is just a diameter for a particular! The f or just f followed by a number denotes how wide the aperture is which, in turn, affects the exposure and depth of field. Lower the number, the wider the aperture, more is the light. Aperture openings are measured as fractions of the focal length of a lens. That is what the f stands for in the aperture rating – focal length. The f/stop numbers come from equation used to find the size of the aperture from the focal length of the lens. For a 50mm lens with the aperture of f/2, the width of the aperture will be 50 divided 2, giving you a diameter of 25mm. You then have to take the radius (half the diameter), square it giving 156.25 and multiply that by pi. The result will be 490.9 250mm² to fit the equation to find the area with the equation pi * r². So we can find the real area of the aperture at various f-stop values. That 50mm lens, with the aperture of f/2.8 will have an area of 250mm². 250mm² is near half compared to 490.9mm². So half light will pass.

Now about shutter speed. Most of the time, we shoot at a fraction of a second, such as 1/200, to double this number, we need to halve the denominator (in this case 200). 1/100 is twice of 1/200, so that is one stop and the exposure is doubled by changing to 1/100. Again, 1/50 is twice than 1/100. We also can talk about half-stop or third-stop. Third-stops is what most cameras use for their settings. These are just arbitrary divisions of each stop. We can decrease the shutter speed by a third of a stop.

Outside special usage, with a tripod and remote shutter release usually, 1/250 is enough good to be handled by a novice. An expert can keep the camera stable at 1/250 stable while handheld. Very higher or very lower invite various artistic effects of the photo and they are niche photography. 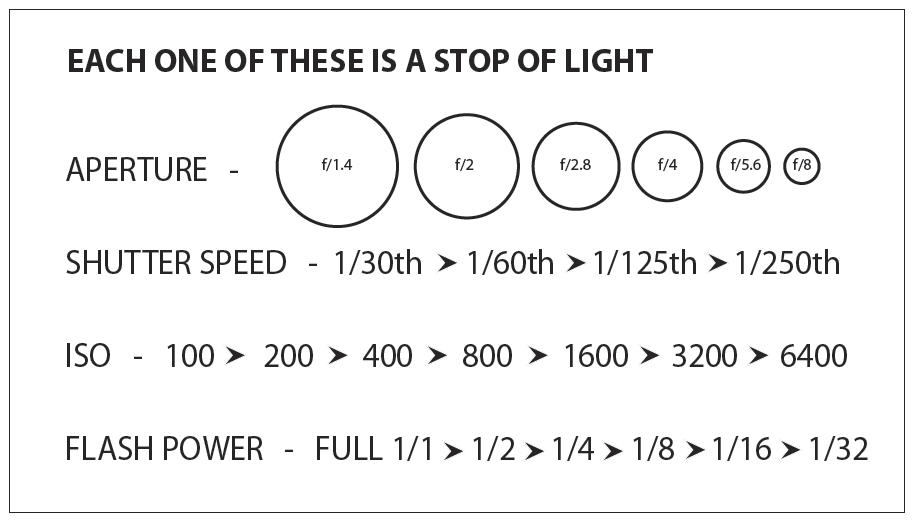 (Illustration credit: frankwhitephotography.com. It is really a great and easy illustration)

So, in this article, we understood “stop” of ISO, aperture and shutter speed. One stop increase in light can mean adjustment of any of these. For the common purpose, in the manual mode, we can keep the shutter speed at 1/250. Aperture commonly limited by the lens, ISO maintained within 100 to 1000. The technical part of photography is not rocket science for common scenes. A 50mm lens with an aperture of f/1.4 is just great for various kind of artistic effects. Background blur, bokeh usually become of different quality from 85mm focal length. A good 85mm f/1.4 lens is costly. You can use 50mm f/1.4 and printed blurred backdrop to escape that limitation. Such usage can be seen in bird photography (if pet bird sits closer to the camera then why buy lens).

Exposure value is a base-2 logarithmic scale, EV = log2 N²/t. EV 0 corresponds to an exposure time of 1s and a relative aperture of f/1.0. If the EV is known, it can be used to select combinations of exposure time and f-number from a standard table.

Hyperfocal distance and depth of fields are related topic to f-stop. There are easy Android applications for photography which make the things easy.

This Article Has Been Shared 640 Times!

Articles Related to What is a Stop in Photography?