Exposure Triangle is made of three points as if forming a virtual triangle which can be explained in illustration. These are – Aperture, ISO and Shutter Speed. When we press the shutter button on our camera, for a short period of time the light passes through the lens hitting the sensor staring into an image – actually the process of creating an image is more complex, but for now we just this is enough. So, take a picture means, roughly means capturing the light coming reflected from the scene that we are framing. Exposure Triangle has a big importance in the learning curve of Digital Photography.

The measurement of the amount of light hitting the sensor is called exposure. A photo is overexposed when some details are lost due to an excessive amount of light that reaches the sensor. A photo is underexposed when some details are lost because the light hitting the sensor is too little. The parameters that govern the the parameters are three :

All digital SLR cameras allow you to adjust these three parameters, even some compact digital allow you to control, it is important to know. Together, aperture, exposure time and ISO form the exposure triangle. For a photographer who does not want to be limited only to automatic shooting modes, it is essential to know how these three parameters interact with each other and how to contribute to create a correct exposure. In addition, they significantly affect the aesthetics of the photo, as a result, their in-depth knowledge enables greater creative control and quality of the pictures.

The Exposure Triangle – sounds like The Customize Windows ! The is possibly unnecessary, but usually it is added to emphasize that we are talking about that very exposure triangle we traditionally know. 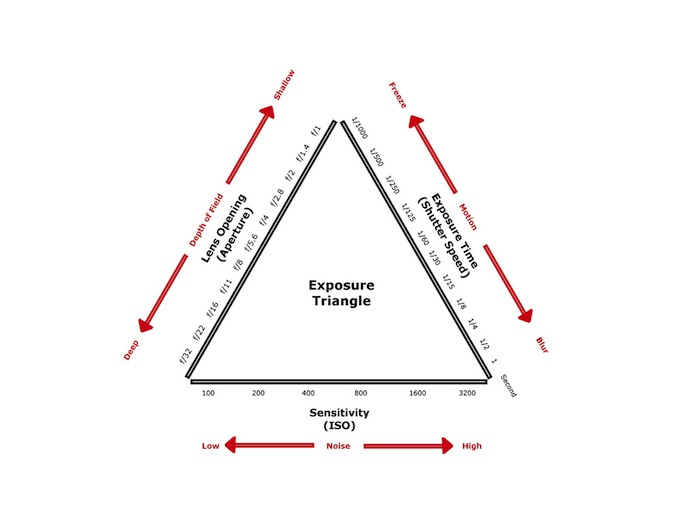 The three parameters in the triangle are closely linked. In fact, to ensure that the same amount of light to reach the sensor, may be multiple combinations of aperture, exposure time, and ISO can be used. For example, when we increase the exposure time, we can obtain the same exposure by decreasing the aperture and leaving the ISO unchanged. If we increase the ISO, we can decrease the exposure time leaving unchanged the opening and so on. Put like that, the discourse concerning the exposure triangle seems pretty simple : it would be a pure play arithmetic to find the right combination between shutter speed, aperture and ISO, so also are available many equivalent solutions. Increasing the ISO cause an increase in noise, which is more visible when dark tones are present in the picture. So, basically it is theoretically fully valid but as there is no perfect and ideal camera system exists, Exposure Triangle has a limitation. Knowing the limitation is called practice keeping the theory in mind.

Tagged With the exposure triangle pdf