Advertisement
You are here: Home » The Future of Cloud Computing in the Era of Artificial Intelligence
Advertisement

The rise of artificial intelligence already delivering impact around the globe and it is expected that in future, artificial intelligence will positively impact virtually all the industries. Even the regions where internet penetration is limited those regions also can not anymore ignore the substantial effect of artificial intelligence due to faster penetration of smartphones with an overall improvement in telecommunication technologies. In the last decade, this world already observed professional and consumer-grade usage of Cloud Computing. Phrases such as “cloud storage” no longer astonishing terminology to the lay smartphone users. Of course, with time Cloud Computing also technically improve. How exactly will AI affect this major industry that has changed the landscape of the web for over a decade? Is it the end of an era in Cloud Computing or the start of a new one?

For the most part, Cloud Computing and Artificial Intelligence are basically partners in that one enables the other to take over the world. Cloud Computing is one of the most effective delivery mediums for AIs to affect everything from a smart assistant, web traffic, to the Internet of Things networks. Suffice it to say, without Cloud Computing, current AI technology would be quite limited.

To say that the modern internet era runs on Cloud technology would not be an understatement. These days, most entities that rely on the internet make use of cloud technology to work. On top of the increased processing speed and storage, opportunities for expansion are also nearly limitless. This is why the Cloud industry is projected to be worth $206.2 billion in 2019 in a report by Gartner. According to NIST:

Cloud Computing provides elastic services, high performance and scalable data storage to a large and increasing number of users. Cloud Computing enlarged the area of computing systems by providing advanced Internet services that complete functionalities of connected devices with low computing power, such as smartphones. Cloud Computing provides large-scale infrastructures for high-performance computing that are dynamically adapt to user and application needs. Today, big use of cloud is for handling intensive computing workloads and for data storage facilities. Most of the consumer-focused computing devices have some “cloud” function for backup. Needless to point towards the declining cost.
Due to promising advancements in Cloud technology, this forecast could change by a lot over the coming months. 2019 to 2020 is a time period that is expected to be particularly lucrative for companies investing in Cloud. The expected market shares have been estimated to be as high as $411 billion with Amazon getting a significant chunk of that money.
This is just the Cloud, however, and without any assistance from outside forces. The long-term projections change significantly when factoring artificial intelligence. Due to the simple fact that AI is forecasted to play a substantial role in e-economics in the decades to come, market share is predicted to grow significantly. Corporations and governments already take this as fact, thus explaining the huge investments in the technology.

While artificial intelligence has been making a lot of waves over the past five years, the subject is surprisingly historic and complex. The concept of intelligent machines actually came about in the 1950s and has steadily gained prominence in pop culture through various media like books, TV shows, and movies. In terms of the practical advancements in AI, however, developments were quite slow in the beginning.
It wasn’t until the early 80s that the technology actually took off and started to have a real-world impact by allowing computers to build simple models, follow basic commands, and learn when fed data. This model has been maintained relatively the same to this day with machine learning involving programs being allowed to develop in intelligence through repeated runs using simulations.
Eventually, the technology got to a point where AIs were able to make complex choices and thanks to the superior multitasking capabilities of machines, they have become ideal platforms for a lot of fields. Just some of the industries that are affected by AI include the following:

Eventually, intelligent machines will be responsible for most jobs that are currently being done by blue collar workers and even some white-collar employees. In fact, with the way AI technology is advancing, hardly any field will remain unaffected by it over the coming years.
Eventually, artificial intelligence is somewhat dependent on data-driven related technologies which need more storage space and computing power for development and deployment. Day by day, the common users are becoming used with terminologies such as Machine Learning, using some systems which have some kind of AI, such as speech recognition, face recognition, text recognition and so on.

With a growing number of devices connected to the internet, the volume of data generated is increasing exponentially. Besides that, new business processes requirements are emerging such as processing the collected data in real-time. Data generated by these devices usually sent to the different cloud, processed and actions are taken based on the result of the analysis.

The melding of Two Technologies

With the value of AI and Cloud Computing having already been established, the benefits of these two technologies melding should be obvious by now. Basically, all of the industries mentioned above will be substantially impacted by delivering AI code through the Cloud and the former increasing the value of the latter. With the pair constantly reinforcing each other, their worthy will increase exponentially in the coming years.
Just as the Cloud is responsible for managing website data and the like, it also acts as a conduit for AIs to perform their intended functions. Everything from Smart Assistants like Alexa and Siri, to the various data analytics platforms on the web relies on this feature in order to work. Eventually, the pairing of the Cloud and AI will result in entire manufacturing frameworks to function as won and independent of human interaction.
The same goes for the telecommunication and customer service industry, with call centre agents being replaced by AIs. Even servers and logistics personnel are expected to be replaced by machine counterparts with only minimal human supervision by qualified individuals appointed to oversee the smooth operation. The corporate benefits of such a setup are simply unfathomable, which is why there is currently a revolution underway.
Various technologies related to so-called AI itself needs massive computing power and storage space. It is not wrong to say that Cloud Computing is helping AI to grow. Indeed, some of the AI development services are being delivered for the developers in typical Cloud Model to integrate with applications by IBM, Microsoft, Google like companies. Cloud Computing is decreasing the cost of deployment to the individual developers. 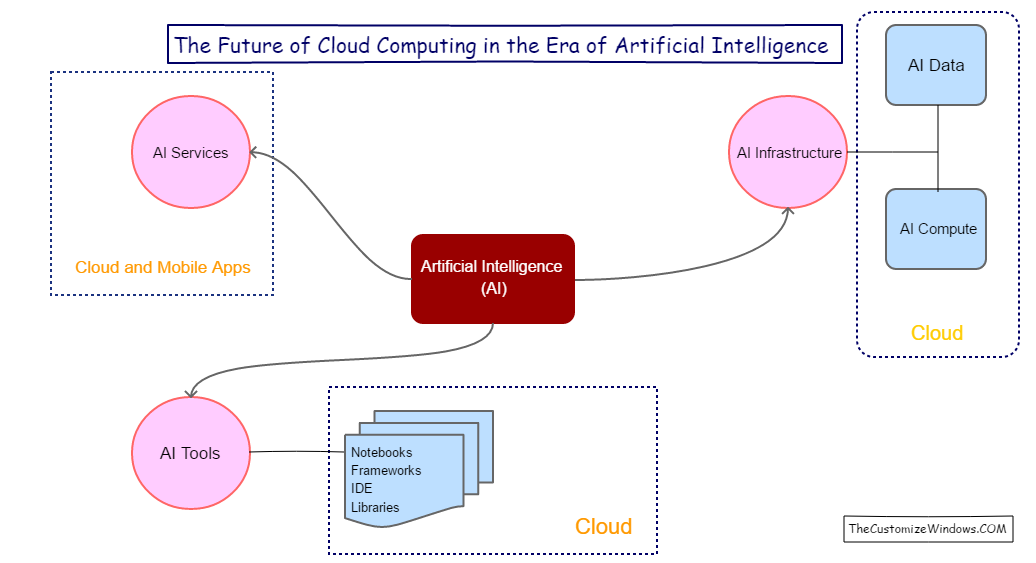 There have been several revolutions since the internet completely took over the world with Cloud Computing being one of the most significant that is still having a huge impact to this day. Naturally, artificial intelligence is also expected to play a major role in reshaping several technologies and the key to the changes that it will enact is its relationship with the Cloud.
With the fear of AI slowly dying out and adoption growing, not even the arts is safe from the influence of AI. Certain advanced machine learning projects have already produced music, literature, and artwork courtesy of codes. This day, some AIs have also proven that they can also put together advanced programs of their own.
SONM and fog computing are upcoming technologies to provide infrastructure for the autonomous car and network of connected cars.
It won’t be long before machines are able to create their own scripts and that will be able to increase their functionality by leaps and bounds. The Cloud will be the delivery platform for this.

Like any newer technologies, both Cloud Computing and AI related technologies have different social and legal aspects involving privacy.
All in all, the marriage of AI and Cloud Computing has produced a future full of possibilities. It is even believed by some of the of most powerful world leaders that the nation to master such a union would hold sway over the future events of the planet. This essentially means that AI is power and the Cloud is the means by which this power can be wielded.